But all is not exactly what it seems.

Datanyze, the “Google for sales and marketing,” recently released more data from its constant web scraping, and that’s where these figures come from. The company searches sites for tags from known SaaS applications — like most marketing automation systems — to determine which vendors are growing, and which are shrinking. The most recent available data, from April, shows that Pardot, which had been bringing in 200-400 or so new customers each month for the past half-year, suddenly added 1,128 in a single month.

Other big gainers included InfusionSoft, with 561, and Marketo, with 518. 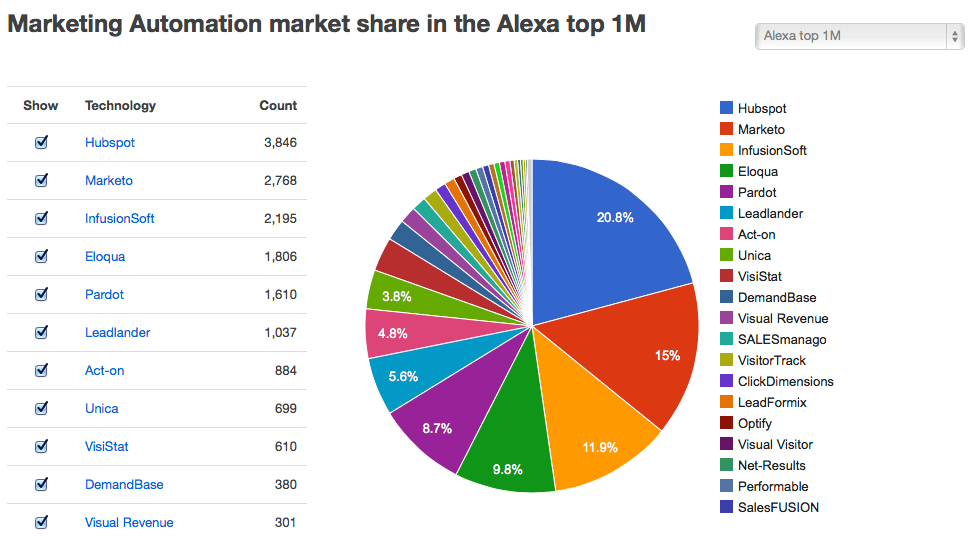 Above: Marketing automation share according to Datanyze. Note, this chart only shows data for the top 1 million sites on the internet.

That’s all very interesting data, no doubt about it, but you also have to account for the fact that many marketing automation systems are freely available for trial periods. So thousands of companies are always testing various vendors’ software , and dropping it when the trial runs out. That means that Datanyze is actually tracking users + trial users: still interesting, but not exactly the same as paying customers.

An example of this is Hubspot, which Datanyze’ full universe of data reports at 31,883 users, but which actually has somewhere north of 12,000 actual, paying, customers.

The more relevant data, perhaps, is who is actually gaining the most net new clients, according to Datanyze.

Some companies, however, seem stuck in neutral. InfusionSoft, for example, showed impressive growth in gaining 561 new companies but also lost almost as many: 523. Not so impressive — until you consider that InfusionSoft targets companies with fewer than 25 employees, and their tiny sites probably haven’t registered on Datanyze scans of the web.

“Our target market is very small businesses,” InfusionSoft’s senior director of communications Rebecca Sprynczynatyk told me. “So when we look at the market share data it under-reports us by a factor of 10 — we have over 21,000 customers.”

Which means InfusionSoft’s churn is not nearly so bad as it might look at first glance.

Of greater concern, perhaps, might be Oracle’s Eloqua, which is aimed at enterprises that are certainly in the top million sites on the internet. Eloqua gained 336 new customers, but lost 328, according to Datanyze.

The data is important for companies that are considering purchasing marketing automation software, since it reveals crucial information about what happens when companies demo various companies’ wares … without the pain of having to try it yourself. Big net gainers are typically growing companies, with trials that successfully conclude with new customers.

it’s also important for investors, because in SaaS companies, customer churn is death. Losing customers every month means the company has to work hard selling new clients every month just to stay even, never mind grow, and even small percentages in monthly loss look enormous from an annual point of view. 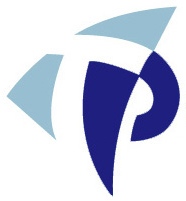 A couple of grains of salt are in order.

First, small business and mid-market solutions are always going to see more churn — both adds and drops — than enterprise solutions. It’s just the nature of the beast: There are more small companies, and they start and stop things faster than big corporations. Secondly, Datanyze data is pretty good, but it’s probably not infallible. While it spiders major companies daily, it’s likely that the numbers are not exact.

The big surprise in this data is Pardot.

Clearly the company has kicked sales and marketing into high gear in 2014, and clearly it’s working. It’s also impressive, since Pardot doesn’t (obviously) offer free trials, starts at a small-business-unfriendly $1,000/month, and targets mid-market to larger businesses. The company has a significant advantage, of course, in being part of Salesforce.com, which gives it access to Salesforce.com’s customer base in a way that few other marketing automation systems can duplicate.

The numbers have been so extreme that I asked Datanyze if there was a difference in their crawling or technology lately that could have caused this.

“In this case, no – more likely trials, etc,” the company’s marketing head, Jon Hearty, told me. “We’re still working out some bugs, but there haven’t been any major changes to our crawler recently that would affect these numbers significantly.”

In any case, Pardot has had an impressive couple of months of growth. Time will tell if it continues, or if the other marketing automation companies will counter its growth with increased marketing efforts of their own.