Lately it seems that everywhere I look, an article pops up to warn me about a new feature on iOS 9 that is about to change everything we know about mobile marketing. The company’s new ad blocking feature has the industry in panic mode, and all I can think is: Why?

Let’s start with the facts: As part of iOS 9, which will launch September 9, Apple will allow users to download ad blocking extensions for its browser, Safari. These extensions will have nothing to do with in-app ads and will only work on mobile web. That is a very important point, for the following reasons:

The mobile web is not where your audience is

Old-fashioned advertising had marketers following a very clear mantra: Be everywhere. But when mobile took over, this point of view became as relevant as a brick cell phone, and marketers adopted a new goal instead: Follow your audience.

Blocking ads on Safari is probably not going to stop marketers from reaching their audience on mobile. If anything, this could be a serious money saver for advertisers that have been investing in the wrong platforms all along. 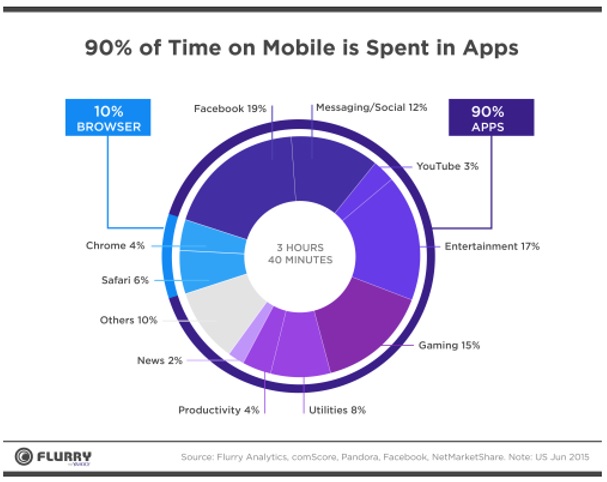 The mobile web is not where the industry is

Looking at the latest numbers from eMarketer, it is clear that ad spend on mobile apps is taking over big-time. This 1:3 ratio means that mobile marketers will not have to move too much in order to make the necessary shift to in-app advertising.

There are really no surprises here. Even before Apple declared its intention to block ads on Safari, analysts predicted that app ad spending would continue to grow at a rapid pace. The new feature on iOS 9 will only allow them to say “we told you so” a lot sooner. 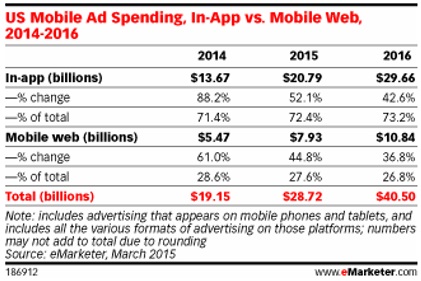 More apps will join the party

The main victims in this story are publishers. Apple is about to block their mobile-web ads, leaving them no choice other than to switch to apps, which is what they should be doing anyway. Mobile marketers, this ad-blocking festival is not a problem, it’s an opportunity. We can expect to see more publishers develop apps, creating an even bigger mobile media playground for advertisers to work with. This should help balance out any rise in advertising costs that might follow the drop in ad inventory.

And it’s not like publishers are out of options. In addition to developing their own apps (which most have chosen to do regardless), publishers can use other apps to monetize their content. We have witnessed a shift in mobile publishing over the past year, with mobile titans presenting a more serious approach to news apps: Snapchat has been investing in its Discover platform, Facebook is testing a standalone news app, and Apple will replace Newsstand with a new, shiny platform for publishers. Not bad at all.

As an earlier VentureBeat story pointed out, in-app ads won’t be completely unaffected by the iOS upgrade. In addition to ad-blocking extensions, Apple will be introducing App Transport Security, which will affect the links leading to mobile ads. Now, while mobile marketers must be familiar with this change, they should also keep in mind that it is just another technical move in the perpetual game of ping-pong between different forces in our field. It is only a matter of (short) time before ad networks update their technology in order to deal these restrictions.

The main message here is not that Apple is against the mobile web, or ads in general, but rather that mobile should be used a certain way. The sooner we realize that smartphones are not in fact a smaller version of desktops, the better our mobile experience will be, both as users and as marketers.

Gilad Bechar is the founder and CEO of Moburst, a global mobile marketing agency. Gilad serves as a mentor to rising startups at Microsoft Accelerator, The Technion, Tel-Aviv University, Unit 8200, and for strategic Moburst clients and is the Academic Director of the Mobile Marketing and New-Media course at Tel-Aviv University.