Last month, Snapchat launched its new Lens feature to the delight of children around the world (they can now make their selfie vomit rainbows), but now it’s time to start paying the tab.

How? Advertising, of course. Tomorrow, on Halloween, promotional content for Fox’s upcoming Peanuts movie will start showing up over selfies shot in Snapchat. 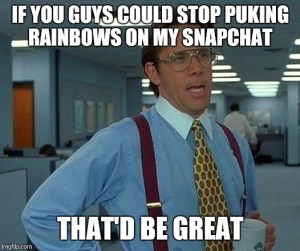 The Financial Times reported earlier in the month that advertisers will pay up to $750,000 to reach Snapchat’s entire audience with such sponsored lenses during key times like Halloween, Thanksgiving, or Black Friday.

In Snapchat, users can snap a selfie photo, then press and hold on the screen to bring up a menu of lenses. They can also play around with the various lenses, modifying them before they snap a selfie. Now Peanuts movie lenses will be among the choices.

Fox also bought sponsored Geofilters — special overlays for “snaps” that can only be accessed in certain locations.

Sponsored Lens is among the first few attempts by Snapchat to start making bank off its huge audience. So far, advertisers are reporting broad reach on the platform, especially to the highly coveted 18- to 34-year-old millennial crowd.

In September, Snapchat announced its first in-app purchase, offering users the chance to replay old snaps for 99 cents, though some users blanched at the idea of having to pay to see their own content again.