In the Information Age, where people are tethered to their smartphones, just waiting to pounce on Donald Trump for announcing something ridiculous, nothing trends faster than insensitive, politically-incorrect statements — this is especially true for ads.

It’s always been important for advertisers and content creators to consider their target audience when developing an ad campaign. In the past year, however, we have seen a slew of ad campaigns that seem to have skipped over this essential, yet obvious, standard. Perhaps advertisers forget that unless they carefully understand and represent their audience’s values, they’ll get bombarded with aggressive tweets, posts, pins, and shares, calling them cold, insensitive, and downright ignorant.

These kinds of campaigns can easily be avoided if advertisers learn to engage better with their consumers so that they truly grasp their audience’s character.

That said, here are seven ad campaigns that just plain failed in 2015.

1. Bloomingdale’s: Spike your best friend’s eggnog when they’re not looking

There’s no way you missed this one. In November, luxury department store Bloomingdale’s published an ad in its holiday catalog that was a bit, well, troubling.

The ad copy read, “Spike your best friend’s eggnog when they’re not looking” — which is already a pretty poor choice of words. But to make matters worse, Bloomingdale’s superimposed the questionable text over a rather uncomfortable image of a man and a woman. In it, the man is peering at the woman from the corner of his eyes while she’s turned away laughing. Sketchy, right?

Naturally, readers contended that the ad encouraged date rape. How could Bloomingdale’s expect any other outcome by placing this ad in a magazine targeting women? 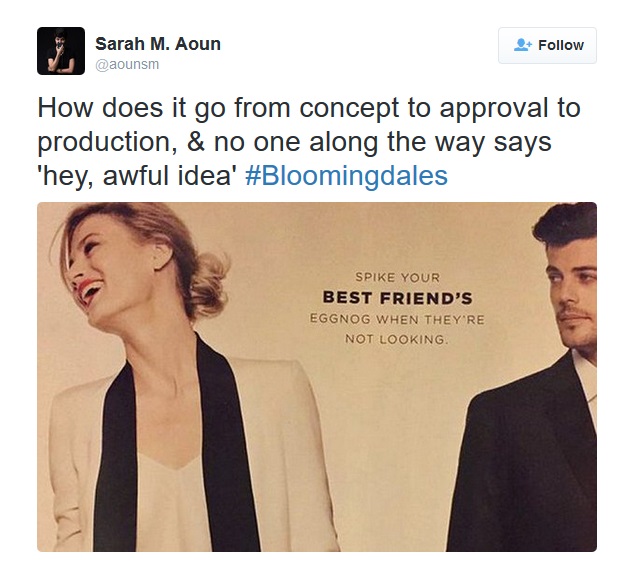 In this instance, not only did Protein World make a mistake, but it made the same mistake twice.

First, in the UK, Protein World sponsored an ad that read, “Are you beach body ready?” featuring a bikini-clad model named Renee Somerfield. Naturally, it sparked an outrage, with Londoners claiming that the ad oppresses, insults, and sexualizes women and their bodies.

Despite the uproar, Protein World launched the same campaign in New York City. I’m not sure if the company thought the ad might get a different reaction, even though New York is notoriously liberal and outspoken. Unsurprisingly, New Yorkers reacted just the same as their London counterparts. 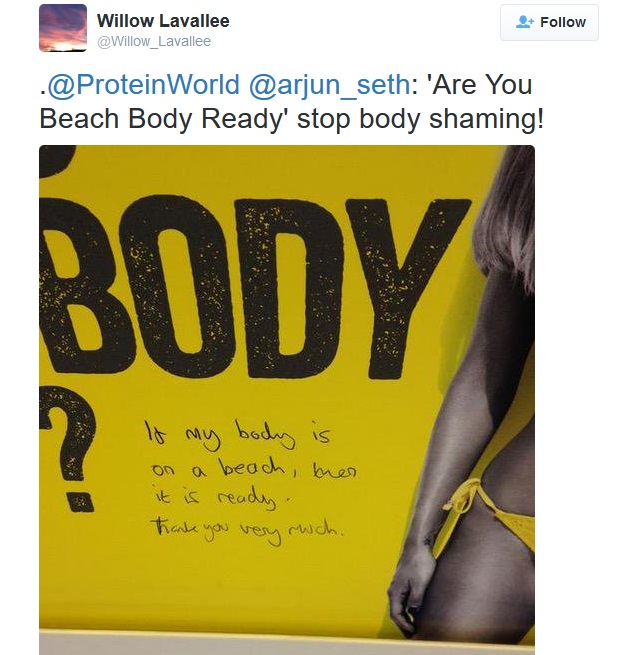 Somehow, Bud Light has been promoting the slogan “Up For Whatever” for about two years. But only this past year did the major American beer company come under fire for its branding.

It was meant to bring about feelings of carefree spontaneity, but instead, many read the bottle’s thoughtless tagline, “the perfect beer for removing ‘no’ from your vocabulary for the night,” as encouraging rape culture and promoting reckless drinking. It ignited a flurry of criticism on social media.

In considering that alcohol is the most common date-rape substance, especially on college campuses where date rape is an increasing concern and beer flows from the tap, it’s a wonder this campaign idea ever left the conference room. 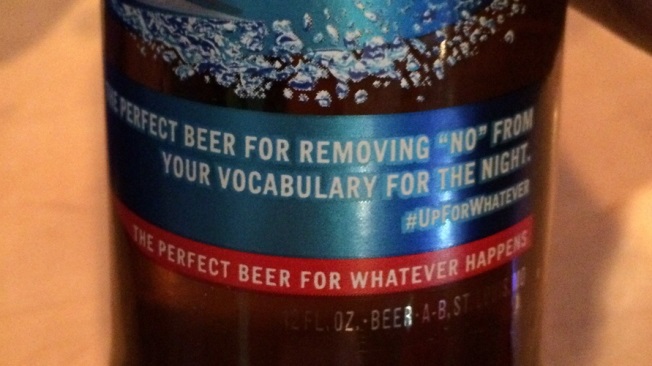 In March, Starbucks CEO Howard Schultz, in a video message to employees, encouraged Starbucks baristas to write “Race Together” on coffee cups; but, according to the video, he did so against the better judgement of his colleagues, who contended that it wasn’t his place to comment on this contentious subject.

Still, Schultz figured this campaign would foster conversation, compassion, and empathy, as he hoped it would push baristas and customers to initiate an intelligent discussion about race relations.

Of course, Twitter exploded and the campaign was met with overwhelming backlash from the general public. Many were skeptical of whether the baristas, most of them young adults, were trained to discuss such controversial and contentious subject matters. They also saw the campaign as trivializing a major issue.

5. Amazon’s “The Man In The High Castle:” Nazi Germany and Imperial Japan imagery in the New York City subways

In November, Amazon sought to promote its new television show, “The Man in the High Castle,” which depicts an alternate reality in which Nazi Germany and Japan won World War II. It’s an interesting premise of course, but Amazon could have done just about anything to advertise the show than what it did do, which was to cover New York City subways — seats, walls, and ceilings — with Nazi and Imperial Japanese paraphernalia.

Considering that New York City is the second most Jewish city in the world, this wasn’t the brightest idea. In fact, Mayor De Blasio called the ads “irresponsible and offensive to World War II and Holocaust survivors, their families, and countless other New Yorkers.” 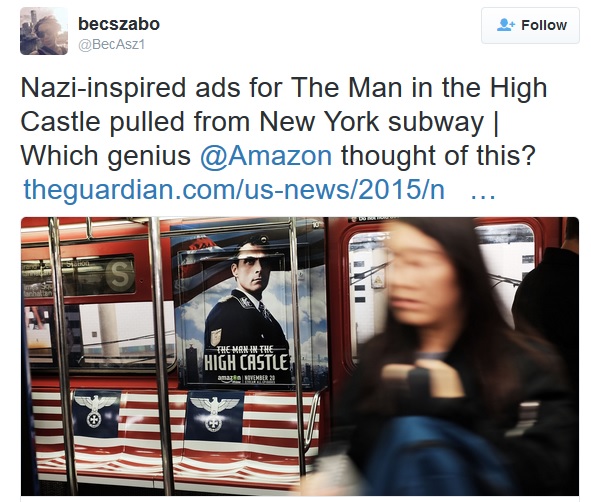 It was only last month, just in time to make this list, that IBM initiated its #HackAHairDryer campaign. It was intended to encourage women to fill more engineering, science, and technology positions in the workplace, however, many women contended that it promoted sexism.

In suggesting that women could only, or wanted only, to hack a beauty product, IBM’s campaign was rooted in outdated stereotypes; and intelligent women have come too far to permit IBM to backpedal all they’ve accomplished. 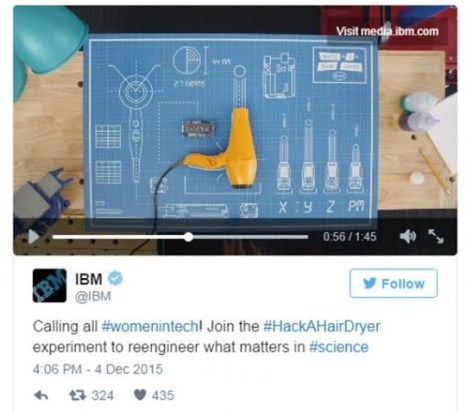 If, like most tech enthusiasts, you live and breathe Silicon Valley, then this one probably hit you hard. In October, Airbnb put up a bunch of passive-aggressive ads around San Francisco bragging that, thanks to Airbnb’s “generous” tax payments, the city could invest in public serviceslike keeping the library open later, keeping art in schools, and building more bike lanes.

It was meant to inspire gratitude and encourage San Franciscans to vote against an upcoming referendum that could have severely regulated short-term rentals in San Francisco.

But it backfired. Big time. No one, and especially not proud San Franciscans, want to be told in such a passive-aggressive way that they should be thankful for a major corporation’s services — especially when half the city was against the corporation’s efforts in the first place.

Clearly, 2015 brought us more than a few campaign flops. Hopefully, we’ll see fewer disasters this year — but for that to happen, brands must first discover new approaches when it comes to developing their campaigns. It’s essential that they empower their audiences rather than belittle them, respect them rather than poke fun at them. 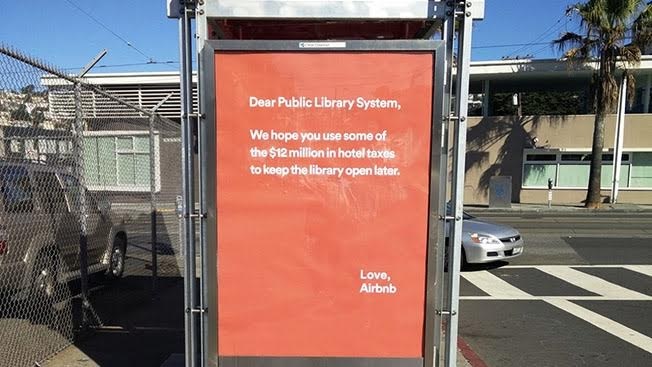 Moti Cohen is the CEO of Apester, an interactive digital storytelling platform for brands and publishers.