Twitter is expanding its Amplify offering in a move that will help creators monetize their work, while also making it easier for advertisers to get placement and reach for their brands. Starting today, video ads can be run against preferred content categories, instead of relying sponsorship deals with select publishers. This solution is available in beta right now for select publishers and advertisers in the U.S.

Publishers will be able to upload their premium quality (read: commercial) videos right to Twitter’s site. Advertisers need only select content categories where they want to run their pre-roll ads before adding on a layer of audience targeting. Twitter Amplify will then piece the two together so that you now have a great video and a relevant advertiser, all without needing to arrange any additional deals between advertiser and publisher. 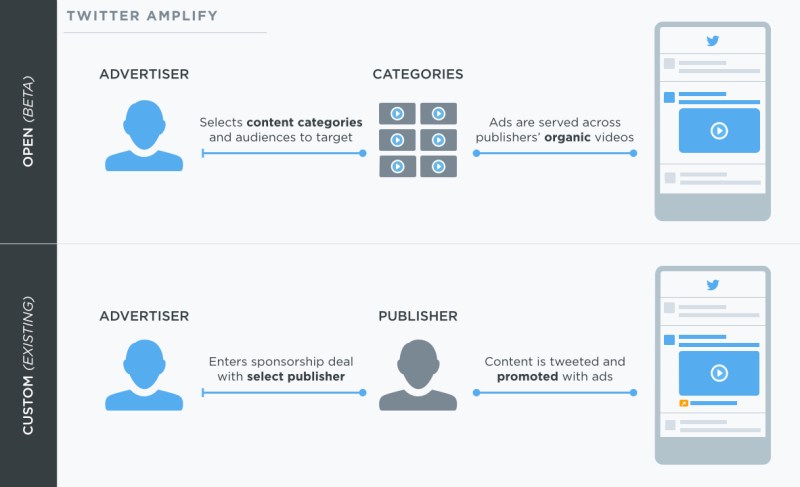 Traditionally, advertisers would have needed to establish a deal with publishers before that final piece of work was submitted, but now Twitter’s ad system is not only helping publishers make money off of their work, but also helping streamline the advertising process.

And while this makes it easier for advertisers, publishers also win because it opens up a whole new line of income for them — they can do sponsored deals or not. Some estimate that the revenue split is around 70/30 in favor of the publishers, which appears to be higher than the industry average.

No longer will advertisers have to go directly to the WWE, Fox, MTV, Dick Clark Productions, USA Today, AOL, Fullscreen, or Entertainment Weekly. Just upload your videos and Twitter Amplify will do the rest, pairing you against its more than 200 TV networks, sports leagues, and digital publishers.

Under the auspices of Twitter Amplify, brands are able to take an advertisement that typically runs on television and bring it to Twitter’s growing ad network. And with all this premium content, there’s a need to really open it up and help it scale. Twitter has already rolled out Auto Amplify, which lets brands and publishers easily create campaigns together, and has even formed deals with the National Football League, the BBC, Neutrogena, and others.

There is a battle waging between Twitter, Facebook, and YouTube for command of both eyeballs and advertising dollars. Inevitably, they will copy each other’s strategies in the race for domination. Twitter’s currently strategy may well boost its ad revenue, the question is – will it also increase overall usage?