Zain Jaffer, who founded mobile ad firm Vungle and was its CEO until this week, was arrested on Tuesday for felony assault, lewd act upon a child, and other related charges.

[Update 10/20/17 3:05 pm : The police filed a report for attempted murder. The district attorney did not file that charge and filed a charge for felony assault instead].

On Thursday, the San Francisco-based maker of a video ads platform announced that the board of directors had placed Jaffer on an indefinite leave of absence for personal reasons. It replaced Jaffer as CEO with Vungle chief operating officer Rick Tallman.

The first details of the arrest for 29-year-old Jaffer surfaced on Friday. San Mateo County records show he was arrested for attempted murder and other charges. But the district attorney dropped the attempted murder charge. Instead, Jaffer has been formally charged with felony assault, child abuse, battery upon an officer and emergency personnel, lewd act upon a child, and oral copulation with a person under 14, said Steve Wagstaffe, district attorney for the county of San Mateo, California, in an interview on Friday afternoon. He said the battery charge was for resisting arrest. 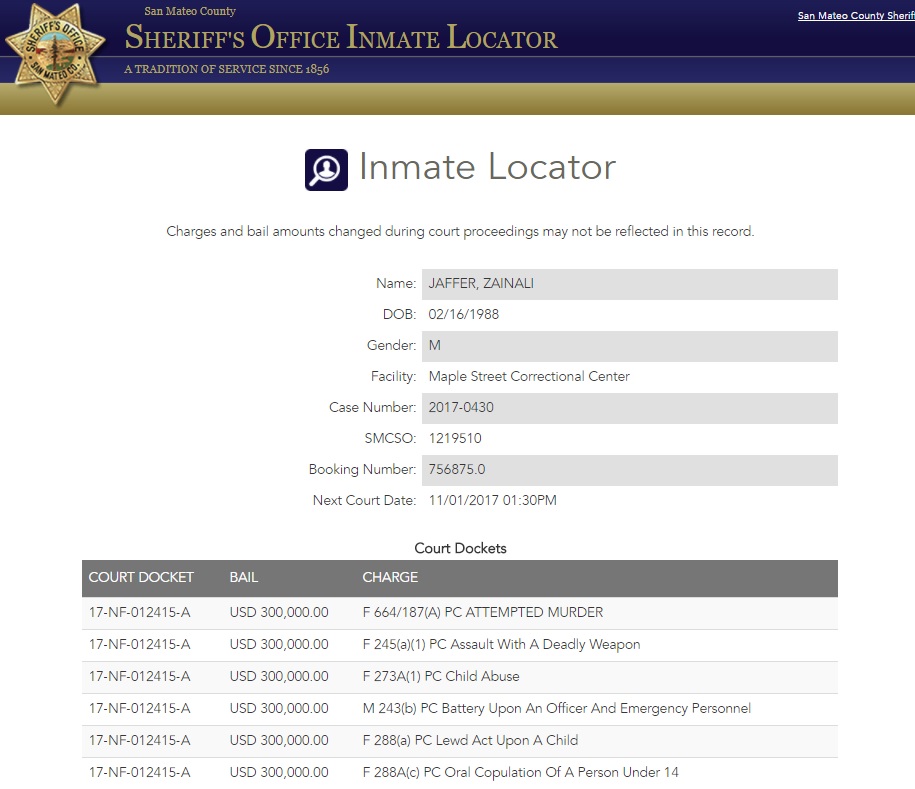 As part of the announcement on Thursday, the company said that Vungle’s board voted to replace Jaffer as CEO immediately after being informed of personal issues unrelated to his employment, though no other details were provided. On Friday, after we got in touch about the arrest, the company had more to share.

“While we do not have any information that is not in the public record at this point, these are extremely serious allegations, and we are shocked beyond words,” a Vungle spokesperson told VentureBeat on Friday. “While these are only preliminary charges, they are obviously so serious that it led to the immediate removal of Mr. Jaffer from any operational responsibility at the company. The company stressed that this matter has nothing to do with Mr. Jaffer’s former role at the company.”

David Olmos, attorney for Jaffer, said in an email, “Mr. Jaffer has pled not guilty and he will not comment publicly at this time.”

Jaffer is set to appear in court on November 1. Bail was set for $300,000. Wagstaffe said he did not have additional details to share about the circumstances related to the arrest.

[Updated 10/20/17 6:12 pm with Tallman’s new statement]. It’s worth noting that the “erroneously reported” quote below was Vungle’s own statement:

“We are aware of the extremely serious allegations leveled against our former CEO, and we are shocked beyond words. While these charges are completely unrelated to his former role at the company, they are obviously so serious that it led to his immediate removal.”

“We learned of the allegations late Monday night, and convened a board meeting, removed him as CEO and I was appointed permanent CEO all within 24 hours. He did not step down for personal reasons as has been erroneously reported. We removed him as rapidly as possible.”

“The actions of one individual are in no way reflective of the almost 200 dedicated and hard-working people who work for Vungle. Everyone at the company is appalled and deeply saddened by these events.”