Mobile engagement and interaction are hugely important if you want your app to stay on the user’s phone and avoid that most final and silent of unsubscribes – the uninstall.

But coding additional touchpoints into apps can be time-consuming, and may require you to submit your app for approval once again.

Today WalkMe — a platform that helps to guide and engage website and application users — has announced the launch of WalkMe Apps, a free solution that is trying to solve this exact problem for app developers and allow others (such as the marketing team) to affect the app without coding or re-submission.

Join us at the VB Roadshow in San Francisco to hear how
Pinterest, Zillow, and Glassdoor are making mobile marketing work
May 19, The Village (all proceeds to charity – free report for all attendees)

The idea is a simple one. You use WalkMe’s designer to create “applets” that help drive premium upgrades, boost user experience, reduce uninstalls, and improve app ratings.

And engaged users become fans, and fans recommend your app to others. Between 70 and 90 percent of app installs are organic, so everything you can do to create word-of-mouth recommendation is crucial to success (including shifting from low-quality, high volume paid acquisition tactics to those that encourage high-quality users).

Applets are standalone components that can be integrated into any app — without coding — instantly. I’ve seen the design tool that creates these applets, and it is incredibly easy to use. The entire interface is a click-and-drag affair that requires little effort, and the solution allows you to create applets that engage with only certain segments of users so that you can target the right message to the right consumer. 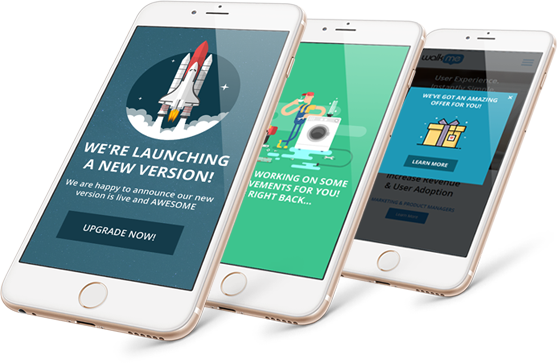 But what does the developer need to do to implement WalkMe, and how does WalkMe integrate with user data to determine those segments?

“The WalkMe dashboard directs the developers, showing them how to import the WalkMe Apps SDK files using CocoaPods or Gradle,” Dan Adika, cofounder and CEO of WalkMe, told me. “The next step would be to add the ‘start WalkMe’ line into the code. The data for segmentation is saved and operated on the end user’s device, and no information is saved on WalkMe Apps servers.”

That seems simple enough as long as developers follow the rules. Updating JavaScript code is allowed in the Apple App Store as long as it does not change the primary purpose of the app by providing features or functionality that are inconsistent with the intended purpose. How does that limit what WalkMe can offer?

“We don’t need to know what type of app the developer is creating, and that’s exactly the beauty of how these applets are designed,” Adika said. “We are merely applying a layer of engagement on top of the original application’s features. We are not adding an external capability.”

Given that these applets generate messages to encourage engagement, rather than adding features, it is unlikely that they will ever cause a breach in Apple’s terms. WalkMe Apps aren’t only available for iOS, however. The applet generator also works for Android apps.

Attaining high levels of engagement and creating raving fans are both important for developers who want to win in a world where over 2,300 apps launch every day. What does Adika think the future of mobile engagement looks like?

“Today, really high-level and advanced mobile engagement features are offered only by a small number of apps that have industry giants behind them,” Adika said. “I believe that in the next couple of years we will see a proliferation of these advanced features — for example, context-intelligent user experience — becoming more accessible to independent developers, and through them to a wider audience.”

And from a development perspective, Adika says that ease-of-use will be a driving factor toward achieving this goal.

WalkMe Apps is available from today for anyone creating apps in iOS or Android.