“We’re seeing how powerful this experience can be for diving into meaningful narratives — and since Twitter’s inception, brands have told some of the very best stories on the platform,” the company said in a blog post announcing the ad program.

Moments is Twitter’s attempt to sift through the many links, images, comments, and conversations on its platform and group the content around specific events or trends. Moments is also meant to make Twitter more meaningful to mainstream users, who often don’t know who to follow or how to find out what’s going on (rendering the app somewhat useless). A new tab in the Twitter app refreshes its list of noteworthy Moments throughout the day, giving users plenty of content to explore.

Brand marketers are eager to jump on board because Moments presents promoted tweets in a new light, and in a newspaper-like context that makes sense to new tweeters. Behind all the excitement among marketers is the idea that the new feature will extend Twitter’s reach to more people, which has long been a problem for Twitter and companies that want to advertise on the platform. 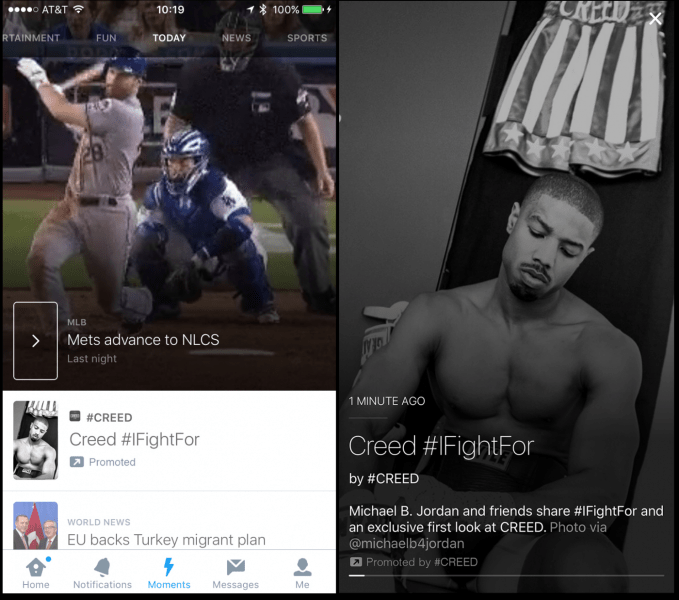 Advertising on Twitter, marketers say, is effective in many cases, but it isn’t cheap. Facebook has a far greater reach and more mainstream appeal, but it too is expensive, and Facebook posts don’t have the real-time quality that tweets have. Facebook just yesterday announced a new universal search feature it hopes will allow it to better compete with Twitter in this area.

Media companies are the first on board to try out Moments for advertisement. The first Promoted Moment will be for the MGM, Warner Brothers, and New Line Cinema production Creed. Twitter says it will show up on the platform on Sunday.

Since Jack Dorsey has come back onboard as CEO at Twitter, he’s moved quickly to reorganize the company, slashing jobs and rolling out products to entice new users (Twitter’s perennial problem). Monetizing the new section shows investors Twitter is serious about revamping the business.