Ephemeral photo-sharing service Snapchat is flexing its ad muscles starting today, with the news that it’s getting its first ever whiskey ads. Almost one year after Snapchat debuted its first ads in the U.S., the social network has nabbed bourbon-maker Jim Beam as one of its prestigious new clients.

The distiller is launching branded video content in support of a new apple-flavored bourbon, and Snapchat users watching “Live Stories” will see the content from today. Live Stories are Snapchat’s curated feed of photos shared by users, and video ads are viewable for 10 seconds. 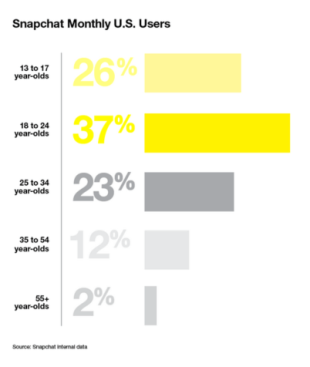 However, any concerns that the ads may show up for Snapchat’s millions of underage users have been addressed — the videos will only appear to those 21 years and older.

So-called “age-gating” is one of the few targeting options brands can use on Snapchat, but in the case of alcohol brands such as Jim Beam, it’s vital. Budweiser ran a similar campaign through Snapchat for Bud Light earlier this year.

According to Snapchat’s own data, 63 percent of U.S.-based Snapchatters are aged between 13 and 24. That means that somewhere in the region of half of all Snapchat users may be over the legal drinking age, though it’s hard to establish an exact figure because of the way Snapchat breaks up its demographics.

Snapchat has been gradually pushing its advertising offering since the launch of the first product in October 2014, and one of the major advantages Snapchat holds over other social networks is its popularity with millennials.

But more than that, of its 100 million (give or take) daily users, the company claims that around two-thirds upload photos. That’s a very high engagement level, and that’s at least partly why Snapchat can purportedly charge brands as much as $750,000 for a single day of advertising.