Native video is becoming hugely important. With 25 percent of U.S. users adopting an ad blocker last year, native content is how marketers are avoiding the cut.

And native video is one of the reasons influencer marketing and user-generated content has become so important.

In a study released today by social media analytics company Quintly  — that took in data from 6.2 million posts from 167,000 Facebook profiles throughout 2016 — one thing is clear. Native video has not only taken over Facebook, it has done so by design.

But with automatic video plays in the feed by default, and a design that downplays the importance of other video platforms, Facebook has been clawing away at YouTube’s dominant position.

“Our last video study already showed that Facebook native videos have been dominating the social network,” Nils Herrmann, digital communications manager at Quintly, told me. “But this study gives a more detailed understanding of this trend and just how substantial it is. It might not come as such a surprise that Facebook’s native videos are outperforming other formats, but what’s interesting is how those native videos performed on average 109 percent better than even YouTube videos. And that number rose as high as 186 percent in December 2016. Also that same month, we found that FB native videos held a 1055 percent higher share rate than YouTube videos. Given how popular YouTube remains on its own outside of Facebook, these numbers raised a few eyebrows!”

Facebook’s tactic of downplaying other formats has seen Vimeo shares almost disappear from the network entirely — only 2 percent of profiles included a Vimeo link in their feeds. And video is now so prevalent on Facebook that 53 percent of all Facebook profiles share video content on their feed. 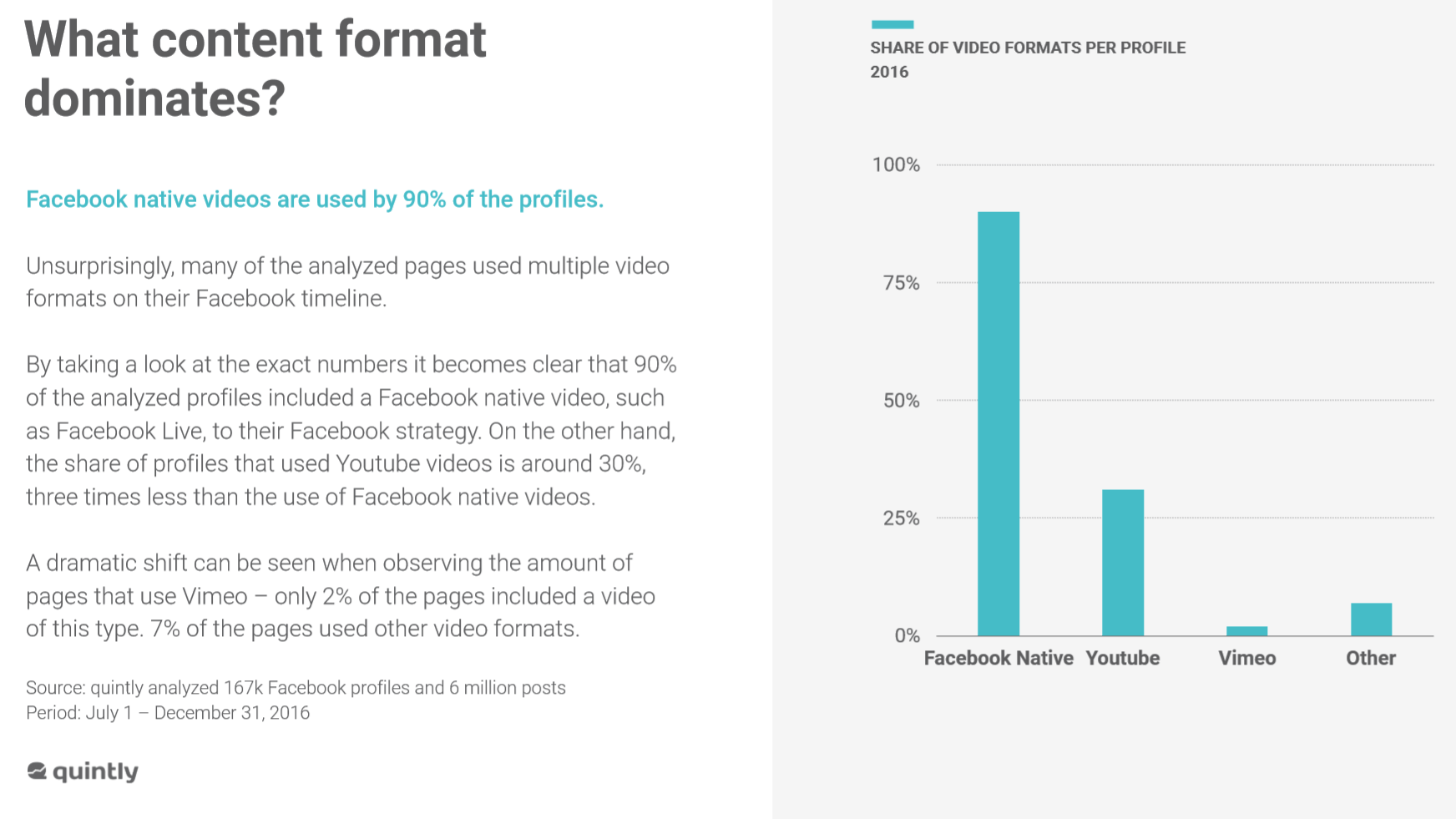 The performance of native videos suggests that influencer marketing could be a big winner for marketers who want to win on Facebook. However, that is a double-edged sword for Mark Zuckerberg’s social network, since it isn’t monetizing these videos in the same way YouTube does.

“At the moment, Facebook native videos simply increase your share of voice through a higher reach than other formats based on the results of our study,” Herrmann said. “This is a good start for both companies and influencers to optimize their strategies, to measure and then adjust. After professional Facebook users build a more grown-up video strategy, Facebook is very likely to do something comparable as YouTube.”

The study includes a few other surprises and further indications that Facebook’s strategy around video-sharing and viewing is allowing the company to catch up with Google’s YouTube.

“For starters, over 90 percent of the analyzed profiles used Facebook native videos — that is 3X more than the use of YouTube videos,” Herrmann said. “And it’s consistent in nearly every analyzed group of different profile sizes that FB native videos were a strong player. We also found that the biggest profiles (with 10 million+ followers) are increasingly likely to use Facebook native videos — a 35 percent growth rate in usage was detected for this profile group alone between July and December 2016.”

With Facebook now pushing video to Samsung and Apple TVs via its new app, the message is clear — video is important.

“Facebook really has succeeded in having their native video format take precedent on their own social network,” Herrmann said. “While it would likely never fully replace the use and shares of YouTube and other formats, in the long run, we might see those become even more rarely used, while Facebook native videos will continue to dominate users’ news feeds everywhere.”