Many music startups are trying to solve two basic problems: creating innovative ways to discover and share music and figuring out a successful business model while solving the first problem. 8tracks is one of the rare few that may have mastered both.

The service prompts users to create unique playlists and/or listen to awesome playlists created by others. All the mainstream music is available, as well as anything that’s uploaded to SoundCloud, which makes its music library more diverse than many other services. It has 8 million active users per month (about half of which are in the 18-to-24 age demographic coveted by advertisers) that listen to about 30 million hours a month — making it larger than Rdio, Songza, and Deezer, according to comScore. And today the startup launched a new Xbox Live app that it hopes will boost listening among its large college-aged user base.

One other thing to note? 8tracks is profitable with just $1.5 million in funding. That’s impressive for a music startup, but even more so when you consider that 8tracks is now paying the same royalty rate for music as industry leader Pandora, thanks to continued growth. 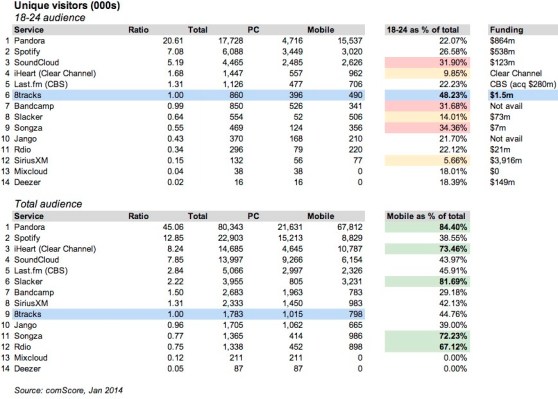 Above: A comparison of major streaming music services by its 18-24 demographic, total listeners, and funding.

So why haven’t you heard of 8tracks?

“We suffer from mindshare, even though we’re twice the size of Rdio,” 8tracks founder and CEO David Porter told VentureBeat. “[Also,] we haven’t spent any money on marketing, and 8tracks might be a little more difficult to get into for new users until they discover some great mixes.”

Porter added that other popular services let people get started listening to something they like much more quickly. For instance, Pandora lets you start with a single song, artist, or album, and Spotify gives you an on-demand library of music to choose from. And in my experience, profitable startups with a relatively small amount of funding don’t really prioritize their time trying to gain media attention because they don’t need it as badly.

Also, when you hear the quick summary for what 8tracks does, it doesn’t necessarily sound like something that isn’t already offered on Spotify — something Porter acknowledges.

“I’d argue that the majority of playlists on Spotify were created out of convenience, not because it’s a good mix of songs,” Porter told me. “We actually have two different [target] users. The ones that just want to listen to and discover new songs, and those that create really good playlists that are recognized by their peers and other music fans.”

I have to agree with Porter’s assessment because the only kind of playlists I’d be good at making would be ones that were intentionally bad. (For example, a “Sad hayride music mix” that consists of every radio hit from Mumford and Sons.) Those who are good at making playlists on 8tracks do stand out with mixes for pretty much everything — wearing sweaters, concentrating, taking legal amphetamines, etc.

“Not to diss them, but Pandora is sort of like glorified Muzak when you really get down to it,” he said, noting that there’s certainly a market for this and Pandora has done a good job of monetizing it. “That’s fine when you just want something on in the background, but playlists on 8tracks appeal to people who are actively trying to discover new music.”

Porter said 8tracks really doesn’t do the best job of predicting playlists a person will probably like based on their past usage. That’s an area he’d like to improve going forward and something that could pull more people away from other freemium online radio services.

When I inquired about how 8tracks plans to poach Pandora listeners, Porter said it’s already happening. For proof he had me search “Pandora 8tracks” on Twitter, which did actually pull up quite a few tweets with people commenting about how much better they liked the service.

“This isn’t just [8tracks] interns tweeting or anything like that,” he said, urging me to click the “all tweets” tab. “I do think there’s plenty of room in the market for both 8tracks and Pandora to exist, though.”

While Pandora generates revenue primarily by using a large sales teams in local markets, 8tracks plans on doing more native, non-traditional advertising. The company signed its first direct ad deal with Victoria’s Secret earlier this month, which included a package of display ads across its various platforms. As part of the deal, 8tracks is also working with the company to choose playlists that will be featured in a Victoria’s Secret-branded music player you can embed into any website. Eventually, Porter said, 8tracks will also offer audio advertising.

Founded in 2008, the San Francisco, Calif.-based startup is seeking a new round of funding, Porter said. In addition to the new Xbox Live app, 8tracks is planning to release a new version of its mobile apps for iOS and Android in the near future.