Last week, Spotify released a massive update to its user interface that serves up music playlists according to the user’s location, time of day, and musical tastes. It also added a brand new feature called Running that offers users a series of playlists for their run that will match the pace of the runner. The overhaul is intended to grab Spotify users at every point in their day.

When I spoke with Spotify’s chief product officer Gustav Söderström at Spotify’s press event last week, he said, “We have this bottle of champagne saved for the first day that we see a user actually never pausing through the whole day — that would be the aim.”

As someone who likes to listen to music, but doesn’t make the effort to do it throughout the day, I was curious to see if Spotify’s new interface could keep me roped in. Usually when I wake up, I turn to Twitter to see what’s been going on while I’ve been asleep. Today, I opened Spotify first. The app served me several playlists: classical remixes of pop songs, upbeat indie music, and some high-energy workout playlists. I picked one of the indie rock playlists and then I went to Twitter to surf the news from bed.

After about 10 or 15 minutes of this I got up and went about my morning routine. For me this includes a little mini workout, feeding my dog and cat, and then taking the dog for a walk before hopping in the shower.

During the workout I jammed out to some “throwbacks,” but afterwards I was ready for the news. I wanted Spotify to know already that I’m a news junkie, but since this is a new feature, I have to train the app to know news is something I care about.

In Spotify’s menu there’s an item called Shows; this is where you can select podcasts and series to follow. There are ten categories: Lifestyle, Storytellers, Tech & Gaming, Society & Culture, News, Learn Something, Comedy, Entertainment, Sports & Recreation, and Science & Nature.

Within the News category, there seems to be one problem off the bat. All of the shows are podcasts, and that means they’re at least a day behind. If I’m going to listen to the news, I want it to be today’s news, not yesterday’s. CBS Local News Headlines and Slate’s Daily podcast are the only two podcasts so far that offer day-of news. 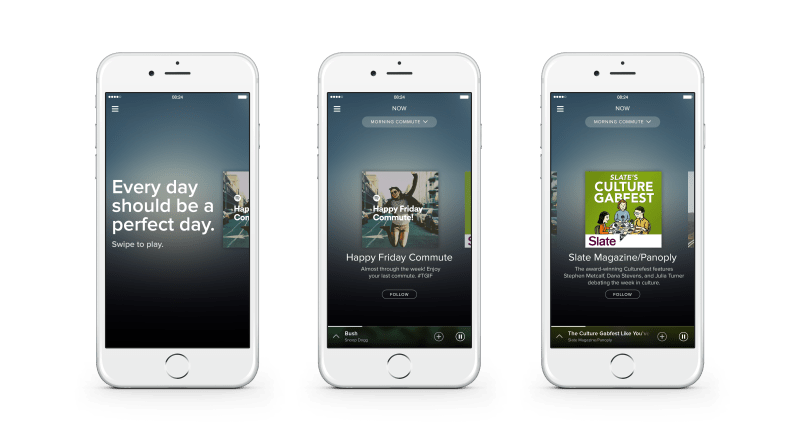 If I had my wish, I would be listening to the news during my morning commute. Generally I don’t, however, because I take the subway to work and can’t stream content underground. However, Spotify will let you download podcasts, or in my case the news, so you can listen underground. It does not appear that you can do the same thing with music — unless you pay for Spotify’s premium service.

But for those of you who drive to work, Spotify offers a pretty nice experience and a much wider variety of music and shows than you’ll typically find on the radio.

Lots of people listen to music while they work, but I am not one of them. When I’m working I really prefer silence; it helps me concentrate. There is one exception to that rule, and that’s instrumental music. I can’t have words or anything that I really like and know or I’ll lose focus. This is exactly why I don’t often listen to music at work; if I do, I rely on Pandora to serve me a random assortment of instrumental music.

Let’s just say making playlists for work is just not high on my priority stack. I want someone to pick the music so that I can focus on other things.

The new Spotify is all about playlists. In the past, Spotify served up mood playlists, but its new rash of playlists make an attempt at being more personalized. Spotify now takes into account the time of day you’re listening and your location before suggesting playlists. It’s not a new idea — Songza has been pushing curated playlists targeted to the time of day and user activity for a while — but Spotify’s user data may bring more value to this feature set.

“Our big advantage is that we have eight years of user data,” said Söderström. That means Spotify can extend information about its power users to better target its playlists to other individuals. Söderström added that there are “several billion” playlists on Spotify.

Still, even with all the choices, I had to pull off my headphones in order to concentrate on my work. 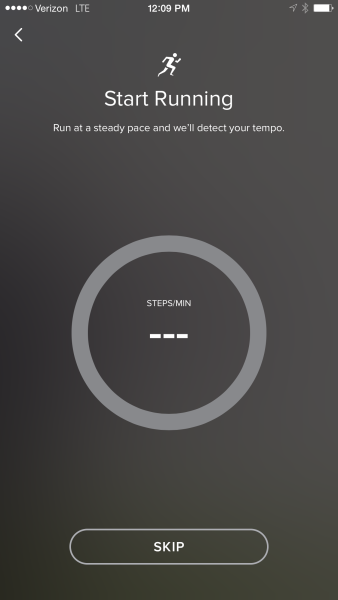 I took a break during lunch to try out Spotify’s new Running feature. The feature is supposed to serve you a playlist that matches the tempo of your run. Spotify has two types of running music, Running Originals and Running Playlists. Spotify’s original playlists consist of new music created specifically with Spotify runners in mind. Its running playlists include selections of music matched to the tempo of your run.

Running Originals are all electronic music soundtracks, one of which is created by Dutch DJ Tiesto. The tracks blend pretty seamlessly together so you don’t know a new song is starting. If you like running to music that sounds like it should be in an action movie, Running Originals are for you.

If action movies aren’t your thing, you can select one of Spotify’s playlists. I went with Hip Hop & RnB. When I launch the playlist, Spotify tells me to start running so it can register my running pace. The app wasn’t able to read my tempo on the first try, so I had to do this part twice. Warning: It took 30 seconds or so for the app to pick up my pace — which may not sound long, but it feels like a long time. You can also set your pace manually.

With the playlists, Spotify makes an effort to fade down one track and fade up the next, so there’s no dead space between songs. I liked that the songs roughly matched my pace; even if they didn’t exactly match, I found myself running in step to the beat anyway. For those of us motivated by music, Spotify’s running feature helps you run consistently at the same pace.

With other music streaming apps I’ve used while running, I would get a song every once in a while that matched my pace. Sure, I was energized while that song is on, but the next song could derail my enthusiasm and pace.

As I bounded through New York City’s SoHo neighborhood towards the Hudson River, I found myself getting really into my run. Song after song, the music was still matching my tempo. Out of my way, chubby white men in suits! I’m running! I found myself thinking as I passed flocks of people undoubtedly on their way to a wine-fueled lunch. 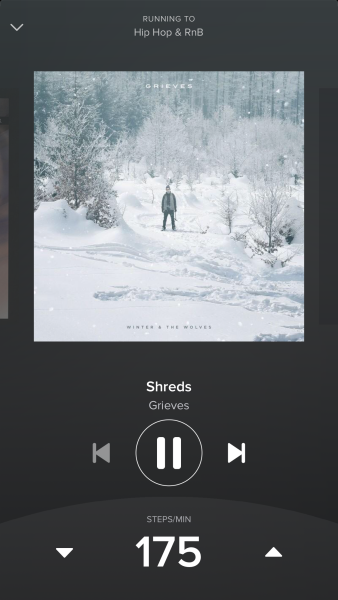 Though crude, the running feature does what it’s supposed to — it gets you jazzed about running. It’s certainly better than anything else I’ve tried.

But it has lots of room for improvement. As someone who does not pay for Spotify, I would love to see it improve the advertising experience on the running app. Ads come on every 30 minutes, and they are jarring. Unlike the music, which Spotify took pains to blend together, the ads interrupt your flow suddenly. It’s obnoxious, and Spotify would do well to refine how it serves ads to runners. I do recognize that I could also just pay for premium and avoid ads altogether.

Also, Spotify makes it seem like the running soundtracks speed up or slow down as you change pace, and that is not the case (if it is supposed to do that, it didn’t work for me). You have to manually adjust your pace as you go. In the future, it would be great if Spotify refined the app so that it did match your pace throughout your run without the need for manual adjustments.

I’m skipping over Spotify’s Evening Commute playlists and jumping right to Early Evening. This is perhaps the most eclectic of the playlist offering, with soundtracks for decompressing, working out, making dinner, rolling a jay, or really whatever you’re into.

I personally like to listen to jazz vocalist Nancy Wilson disparage cheating husbands while I whip up a meal, so this might be where I diverge from Spotify’s playlists and search for some albums.

Finally, Spotify wants to serve you tunes to put you to sleep — “sleep soundtracks,” if you will. These are pretty typical of those alarm clocks that play the sounds of rainstorms, rolling oceans, and other white noise. In the way of actual music, Spotify has the calming sounds of piano reveries and sonatas.

I’m not much of a white noise enthusiast (I sleep better in relative silence), so after thirty minutes of listening to Spotify’s bedtime sounds I had to shut it off. It had been a long day with Spotify, and I needed a break.

That said, the tool overall is a solid music companion, certainly more flexible than other music platforms I’ve used. And its new running feature, though crude, is energizing and has really great promise if Spotify can find a way to make its tempo tool more dynamic.

A final note: Though Spotify seems to have playlists for all hours of the day, it falls short in one area: a playlist for bedtime activities that may precede actual sleep. For that, you’ll have to come up with your own soundtrack. Maybe some Marvin Gaye?