A study has found that music fans who use peer-to-peer file sharing services actually purchase more music, on average, than those who stay completely legit.

The study by the American Assembly, a nonpartisan public policy think tank housed at Columbia University, found that file sharers purchase around 30 percent more music than non-file sharers. File sharers also have much larger music collections, naturally, with a big boost to their libraries provided by files they’ve downloaded without buying.

The study is merely the latest to confirm what proponents of P2P file sharing have been claiming all along: People who use P2P technologies are actually the music industry’s biggest fans.

Instead, however, the music industry, led by the RIAA, has spent over a decade hounding P2P sites out of existence and prosecuting its biggest fans for sharing files illegally.

And let’s not mince words: File-sharing is generally considered a violation of copyright law, and the courts have been inclined to pass severe financial penalties on those convicted of filesharing. The RIAA claims that it takes these tactics to help offset piracy, which it claims costs the industry billions of dollars annually.

But it’s not hard to see an alternate universe in these charts: one in which the music industry learned to overlook these petty copyright crimes and found ways to turn its biggest fans into even bigger customers. 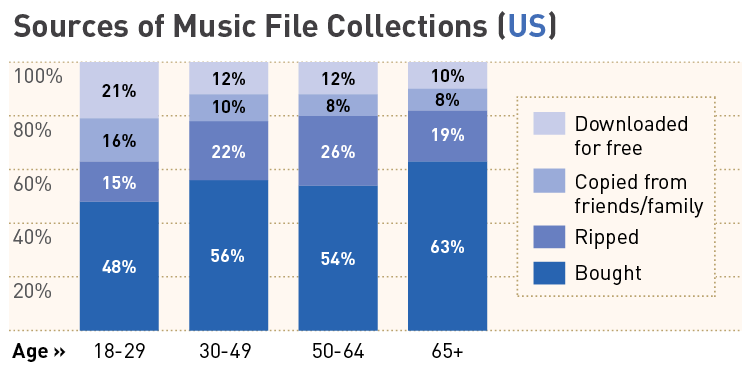