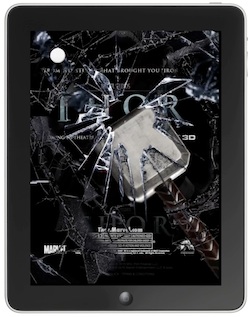 It has been almost exactly a year since Google finally closed its deal to acquire mobile ad network AdMob (following a long review by the Federal Trade Commission). To celebrate the anniversary, the company is announcing three significant improvements.

First, the company announced some new formats for tablet advertising, including interactive videos and 360-degree images. Product manager Clay Bavor and engineering director Mark Schaaf told me that advertisers could already build these kinds of tablet ads using AdMob’s tools for the HTML5 format, but by creating standardized templates, AdMob has created an easy “on-ramp” that allows advertisers to quickly create slick-looking tablet ads. (You can see a demo video of the tablet ad formats below.)

Google also announced that it’s improving AdMob’s integration with its DoubleClick ad serving products. DoubleClick for Publishers Small Business now supports mobile advertising, and DoubleClick ad serving is now available in the AdMob network, with support for rich media formats. The broader vision, Bavor said, is to allow publishers to sell ads across different platforms from within a single service, rather than making them go somewhere else to handle their mobile ads.

For its third big improvement, AdMob said it’s also helping developers promote their own apps through house ads in their other apps. Previously, those house ads only had a limited set of features, Bavor said, but now developers can access the full set of formats and targeting capabilities that AdMob provides to its regular advertisers.

Besides announcing some improvements, AdMob shared some growth numbers. The network is receiving 3.5 times as many ad requests as it was a year ago. It saw 2.7 billion daily ad requests in April, up from 2 billion in January. And there are now more than 80,000 mobile websites and apps in the network, up from 50,000 in January.