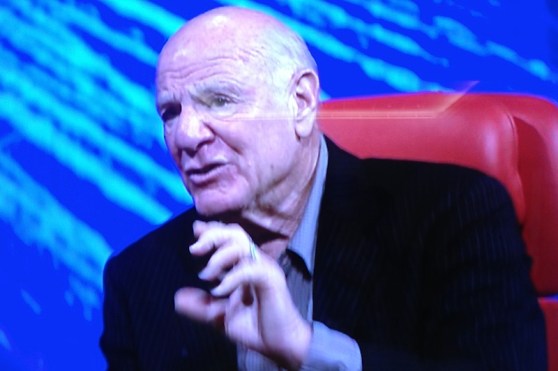 Updated 2:40pm with reaction from Disney/ABC.

RANCHO PALOS VERDES, Calif. — Aereo is not just a service for watching TV remotely — it’s a tool for cracking open the closed networks of TV distribution.

“I don’t want to go beat up broadcasters,” IAC chairman Barry Diller said today. (Aereo is an IAC company.) “I want to move the centricity from fixed-line or satellite systems to open Internet systems.

“The more you can get all forms of video over Internet Protocol, the better off the world is going to be,” Diller said.

So maybe he does want to beat up broadcasters, a little bit. What he really wants to do is hasten the day when broadcast and cable networks both deliver their video over the Internet, and that’s obviously a threat to these companies’ current, closed-network business models. So, Diller said, he’s not surprised they are suing Aereo.

“I’m kind of happy they sued us in such a noisy way, because it’s helping Aereo get known,” Diller said.

Diller currently has “very few” customers, he said, given that it has only been available in New York and, since last week, in Boston. The company plans to offer its service in additional cities in the next six to eight months. It is also open to offering cable network content, not just broadcast over-the-air signals. (It already offers Bloomberg TV.)

In the future, Aereo might even produce its own, independent programming — once it reaches 15 million to 20 million subscribers, Diller said.

“We’re out to get the centricity moved to the Internet. It will never move totally, or at least for the next 20 years. There will be plenty of closed distribution [systems].” But as the world shifts toward open, Internet-based distribution, he wants Aereo to be playing a role.

“I don’t think closed systems can survive long in our world,” Diller said.

But it’s got to defend its business model in court first.