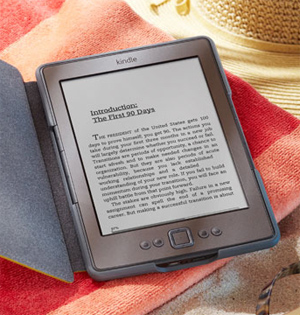 Amazon has started a $6 million annual fund that seeks to encourage more independent authors to publish their works on Kindle first, the company announced today.

Amazon’s Kindle family is on a roll with strong sales over Black Friday, and the $199 Kindle Fire tablet may already be the number two tablet after the iPad in sales. The next piece of the puzzle Amazon needs to figure out is how to get more authors to publish directly to Kindle before print and other e-reader stores. It hopes to do this with the new fund, called KDP Select.

KDP Select works by giving authors and publishers a share of the fund if they agree to make their books exclusive to the Kindle Store for at least 90 days. During the 90 days of exclusivity, the books become eligible to be checked out from the Kindle Owners’ Lending Library.

“By choosing KDP Select, independent authors and publishers have an opportunity to make money in a whole new way and reach the growing audience of Amazon Prime members,” said Russ Grandinetti, VP of Kindle Content, in a statement. “A short 90-day commitment allows authors and publishers to experiment at very low risk. In addition, free promotions are a new tool for KDP Select authors, and we hope to add more such tools over time.”

The monthly royalty payment for each KDP Select title is based on that book’s share of the total number of borrows of all participating KDP books in the Kindle Owners’ Lending Library. So when more people read your title for free from the Lending Library, the amount of money allocated to you increases. Amazon said it expects the KDP Select fund to be sized at a minimum $6 million for 2012, but it has also already allocated $500,000 to be given out before the end of the year.

The Kindle Lending Library has drawn the ire of the U.S.-based Authors Guild, which represents more than 8,000 U.S. writers. The group claims the online retailer is “boldly breaching its contracts” with authors by letting users check out books for free. The Authors Guild mostly appears upset because many publishers denied Amazon’s request to include their titles in the Lending Library, but Amazon went ahead on the grounds that it would still pay a fee whenever someone checked out a book.

In light of the new KDP Select fund, perhaps Amazon has decided to foster more independent works for the Lending Library so it can build a better a relationship with major publishing houses. It also likely sees $6 million a year as chump change if it can convince people to buy tons of Kindles and consume Amazon content on them.