Amazon is finally letting Prime subscribers download movies and T.V. shows for offline access on iOS and Android devices. This service is now available in the U.S., U.K., Germany, and Austria.

It’s worth noting here that the Internet giant already lets Amazon Instant Video users download videos they’ve bought or rented — this latest update relates specifically to the Netflix-style catalog of titles Amazon offers as part of its $99 annual Prime subscription, a service which also offers speedy delivery on goods, and music-streaming, among other benefits.

Based on our tests, not all Prime titles are offered with offline access, which is clearly due to licensing restrictions. Many movies and T.V. shows do seem to be available though, including all Amazon originals, but what other content is available is hit-or-miss — Top Gear, for example, can’t be downloaded, but kiddy favorite the Gruffalo can be. 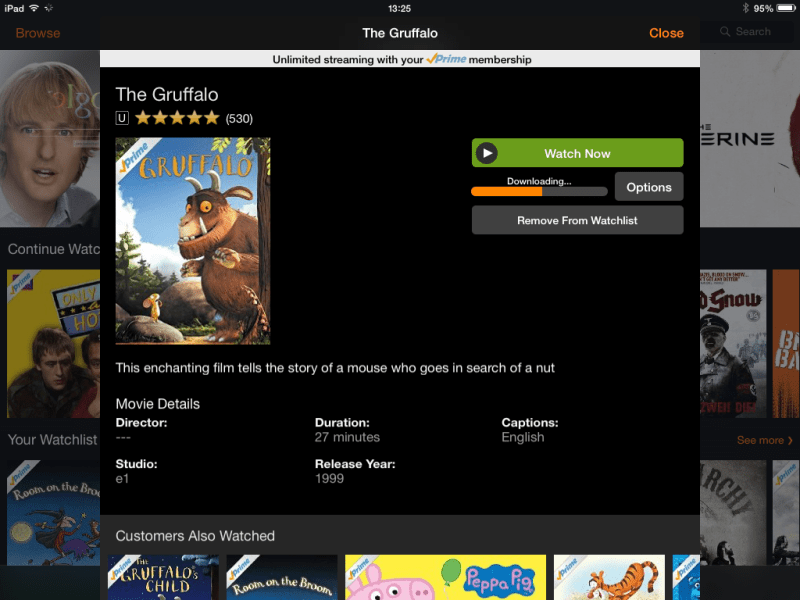 While Amazon already permits Kindle Fire tablet and phone users to download Prime titles, making downloads available to iOS users is a crucial one-up for the company in its battle with Netflix, which has previously stated it has no intentions of ever allowing its content to be accessed offline.

If ever there was any doubt that Amazon was looking to get one up on Netflix, well, in its press release it specifically name-checks its rival: “Amazon Video is the only online subscription streaming video service that enables downloads of titles,” it says, “meaning unlike other subscription streaming services such as Netflix, Prime members can enjoy movies and TV shows as part of their membership even when they don’t have an internet connection available.”

Instead, Netflix is laser-focused on offering exclusive and original content to its 65 million subscribers globally — something it hopes will render features such as offline access irrelevant.