Amazon announced some big news earlier today: Offline access is now available for Prime video subscribers on Android and iOS. However, buried within the main news was something that will surely be welcomed just as much by Android users — they now have a standalone video app. 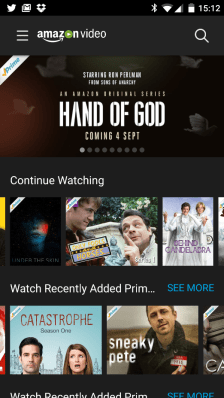 While Amazon first introduced video for Android users last year, the service relied on the main Amazon app to search for videos, and it was a hugely convoluted process.

To enable it, you had to download the Amazon Appstore (.APK) to your Android device, then install the Amazon Video Player from there. This, in turn, let you search for videos directly within the Amazon shopping app, which was linked to the video player.

Today’s news basically transforms the Amazon Video app into a standalone entity, letting you search, watch, and (as of today) download videos directly from within it. You don’t need the main Amazon app anymore. However, Amazon still makes you jump through a unnecessary number of hoops to get the Amazon Video app — it would be much easier if you could simply download it from Google Play.

While I previously argued that Amazon should spin out Prime Video as a standalone service to compete with Netflix, that’s not something that’s likely to happen anytime soon. Offering a completely self-sufficient streaming app for Android is a good start, however, as the company looks to build a much stronger brand around its video-streaming service.