Amazon sent out invitations today (screenshot below) to an official press event that will focus on the company’s video business, which could have something to with the rumored Amazon-branded set-top box we’ve been hearing about for months.

The event, which is scheduled for Apr. 2 in New York City, will be led by Amazon vice president of Kindle Peter Larsen. That said, if Amazon does announce a set-top box, it seems likely that the product will feature the Kindle branding.

Previously, Amazon’s plans for a set-top box include rumors of an affordable device that would compete with the likes of Apple TV, Roku, and Chromecast. The set-top box is also said to feature third-party apps from major streaming services like Netflix and double as a game console of sorts.

But for now, we’re still in the dark as Amazon is waiting until next week to reveal details about its plans to take on the living room. 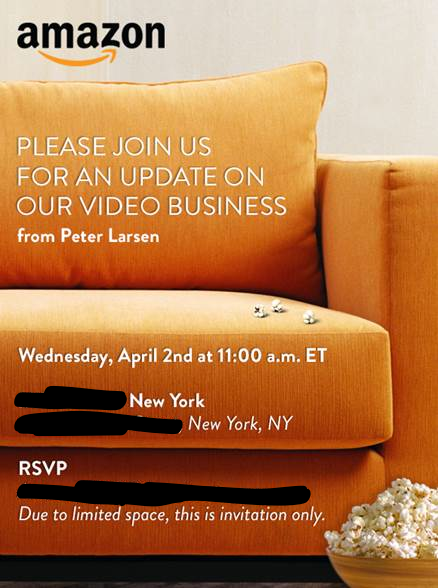 Above: The invitation Amazon sent for a press event to discuss the company’s video business.