Netflix and Amazon’s respective video-on-demand (VoD) offerings are comparable in many ways, but Amazon’s Prime Video service has traditionally differed from its counterpart in one key respect: while Netflix is available to anyone as a straightforward $10 ($8 for legacy subscribers) monthly subscription, U.S.-based viewers have had to pay Amazon $99 per year for its broader Prime subscription, which includes free speedy delivery on goods purchased through Amazon.com, among other add-ons.

Now, Amazon has seemingly taken the advice meted out on VentureBeat last year and spun out the Prime Video element as a separate, standalone service in the U.S. Those in the U.K. and Germany were already able to subscribe to the video element of Prime — this was because European Netflix rival LoveFilm had been available in those markets prior to Amazon acquiring the company in 2011.

But one of the most immediately striking facets of Amazon’s new subscription plan is that it’s well hidden. When you visit the Prime sign-up page, you’ll see the page, as before, with a giant “Start your 30-day Prime free trial” button emblazoned across the top. Tucked underneath that you’ll now notice “see more plans.” 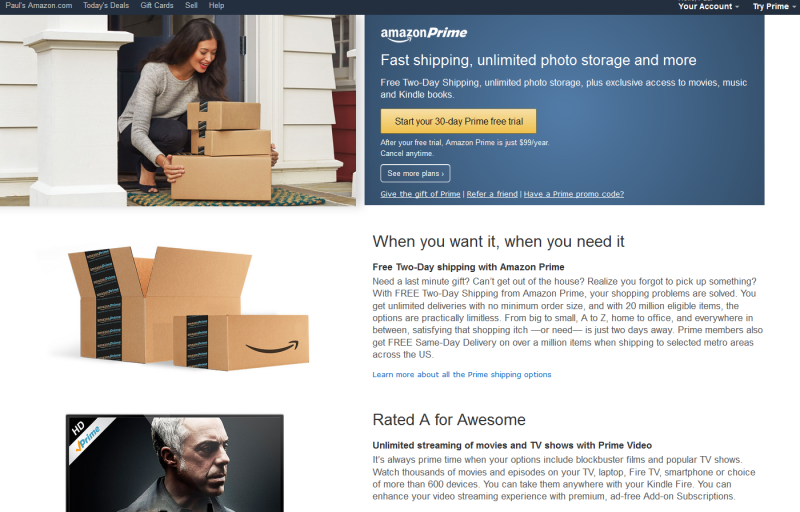 By default, Amazon already has the main Prime subscription selected, with a “best value” marker attached to it. But there are actually two extra options — one just for Prime Video at $9/month, and a new monthly Prime subscription that costs $11/month. The Prime monthly subscription is a continuation of a deal Amazon first announced in conjunction with Sprint last month. 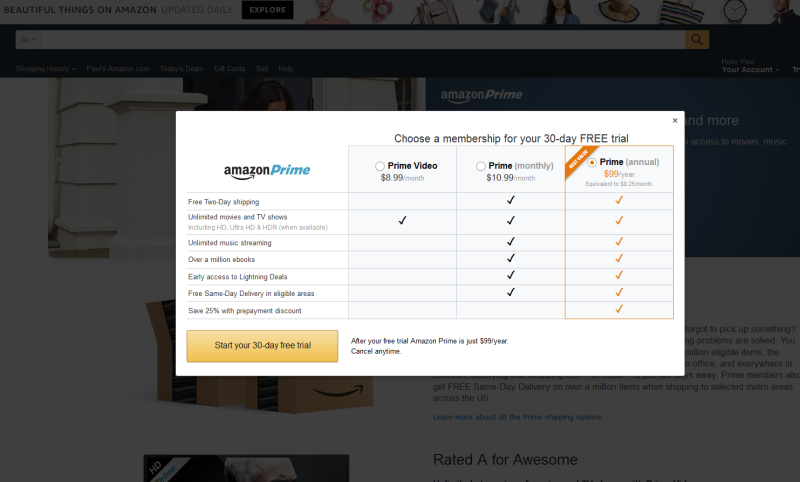 On the surface, it seems odd that anyone would choose to pay $11/month for Prime when they can get it for $99/year (25 percent cheaper). But there are a number of instances where someone may prefer to pay a little more each month, rather than commit to a year — perhaps they only need speedy deliveries over Christmas, or maybe they want to binge-watch an Amazon Original show (such as The Man in the High Castle) on Amazon Prime Video.

But spinning Prime Video out on its own takes away one of the selling points of a Prime monthly subscription.

Of course, there are people out there who simply don’t like long-term commitments — they want the convenience of a recurring subscription coupled with the option to cancel on short notice. And this is who the new Prime Video or Prime (monthly) plans will appeal to. But seeing the plans compared side by side, it appears that Amazon has another motive up its sleeve.

Spinning out two new plans for Prime helps to show just how good a value its annual Prime offering is. Prime Video costs $9/month on its own — sure, this is $1 less than Netflix will be when it moves everyone to the minimum $10 monthly subscription from next month, but that’s a comparison for another day. More importantly, Prime Video only costs $8.25 per month if you sign up for the annual Prime membership — a plan that also gives you a bunch of other goodies.

There are many good reasons why I think Amazon is right to spin Prime Video out as a standalone service. The company is investing heavily in original content and rights to third-party films and programming, but tethering its video offering to a bunch of other services — everything from cloud storage and music streaming to two-hour grocery deliveries and a book-lending library — muddies the marketing waters and makes it harder to sell. Amazon’s annual Prime membership is unquestionably good value, but Netflix holds — and will continue to hold — greater video-streaming mindshare because it’s a brand dedicated to just that.

Sure, by launching Prime Video out on its own, Amazon is giving its customers another option — one that some may welcome with open arms. But I can’t help feeling that the effort is a little half-hearted. For starters, the Prime Video brand doesn’t receive any kind of visible boost — it’s buried away on the Prime homepage. And I can’t imagine Amazon will be shouting about this new monthly Prime Video plan from the rooftops. But even if Amazon does market this extensively, members will be quickly reminded how much more they can get on an annual plan through Amazon Prime — while paying less for it, too.