Podcasting platform Anchor has announced its first moves into monetization by allowing listeners to pay their favorite podcasters through a monthly subscription.

The news comes six months after Anchor introduced a major overhaul, shifting from a short-form social audio platform to a full-fledged podcasting powerhouse. However, the Anchor reboot notably lacked money-making tools for creators. The company’s CEO, Mike Mignano, hinted at the time that monetization features would be a near-term goal for the company, and today that becomes a reality.

The new feature is called Anchor Listener Support, which any creator can activate via their dashboard on the web. Listeners will then see three monthly donation options —  $0.99, $4.99, or $9.99 — to support the podcast creator. They can either enter their payment info on the spot or pay with Apple Pay or Google Pay if they’re on iOS or Android. 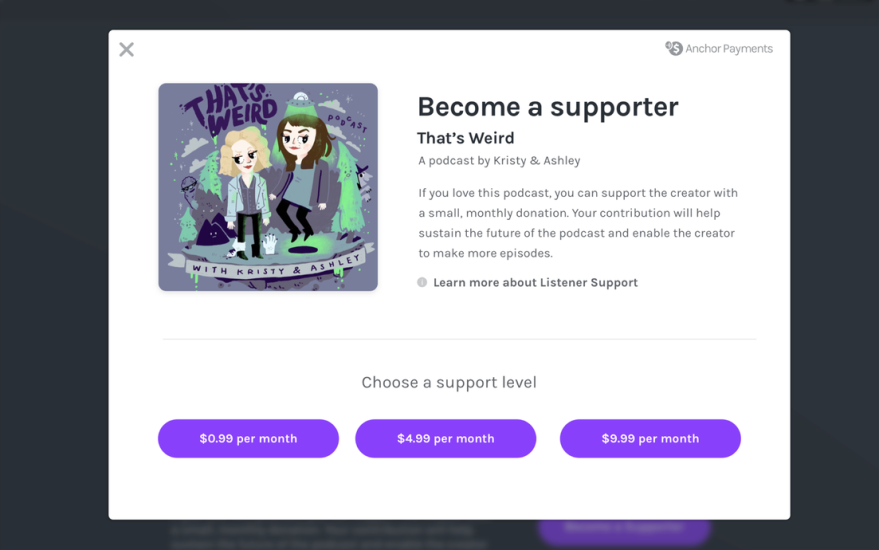 Above: Anchor: “Become a supporter”

It’s worth noting here that payments can only be made through a browser. So if you are on a smartphone, the donation link in a show’s notes will take you to your mobile browser to complete the payment, rather than completing it within the podcast app.

Creators can cash out at any time through their Anchor dashboard, and the company promises that podcasters will receive payment promptly. It’s not entirely free, however, as Anchor will scythe off a 4.5 percent fee, while payment processor Stripe nabs 5 percent plus a $0.10 processing fee and a further $0.25 for each cash-out. So creators get to keep around 90 percent of their fans’ donations. 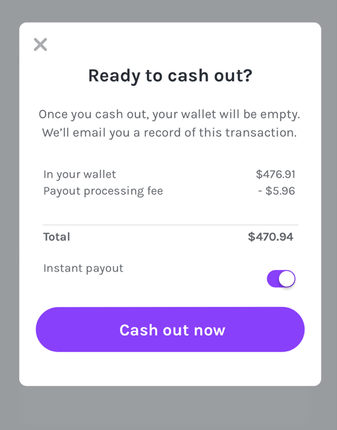 Above: Anchor: Cash out

Founded out of New York in 2015, Anchor is one of a number of podcasting startups to have raised venture capital in recent times, having closed a $10 million series A round of funding from Alphabet’s investment arm GV less than a year ago.

The big technology giants have taken note, too. A few months back, Google launched its own standalone podcast app, which followed Apple rolling out its podcast analytics platform so creators can access more data about how audiences are consuming their podcasts. Apple has offered its own podcast app since 2012.

Podcasting was something of a trend in 2017, and 2018 has continued on a similar trajectory. A recent Edison Research Infinite Dial report into podcast listening trends indicated that 26 percent of people in the U.S. now listen to at least one podcast each month, up two percentage points on 2017. And the number of podcasts they listen to on average has risen to seven per week, up from five last year.