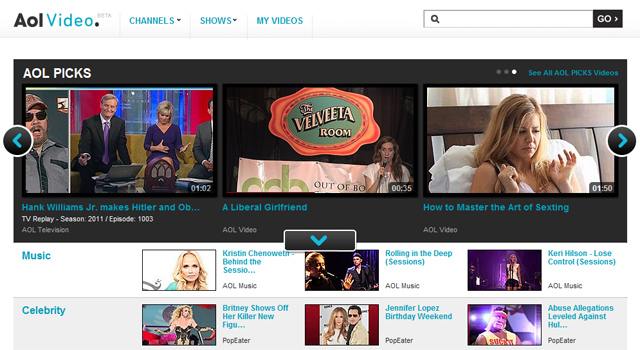 Not to be outdone by Google, AOL on Monday announced it will launch 15 new original web video series produced by or starring celebrities including Jennifer Lopez and Heidi Klum.

We also found out Monday that Google has put up $100 million for original programming on YouTube, with the search giant in talks with the likes of Tony Hawk, Warner Bros. and the production company behind TV comedy The Office. Both Google and AOL likely see original video series as a major opportunity to reach a new generation of web video consumers who have embraced Netflix and Hulu and cut the cord on cable TV.

New original programming on AOL will come from big companies like Michael Eisner’s Vuguru and Warner Bros. One could-be-big show on the list is AIM High, an action series starring Twilight’s Jackson Rathbone, about a high schooler who is also a secret government agent. Another is Jennifer Lopez’s Nuyorican Productions and Believe Entertainment Group’s Tiger Beat Entertainment, which is based on the teen idol magazine and will target the same audience with news and lifestyle features.

“We are pleased to announce a slate of programming that shows our innovative approach to video,” said Ran Harnevo, Senior VP of AOL Video, in a statement. “It provides one of the best platforms on the Web to connect advertisers with premium content at scale. We’ve built a video ecosystem supported by our data and insights into what excites viewers, combined with a deep understanding of what they share and discuss online.”

AOL has been in trouble with its stock price as of late, but the company has had positive traction when it comes to its media properties, especially the Huffington Post. It likely hopes a slate of original video will give it another opportunity to attract strong pageviews and big advertising dollars.

A full listing of AOL’s new video series can be read below:

Women
• Little Women, Big Cars: From bake sales and soccer games to gossip and divorce, four moms navigate the comedy and drama of suburban life. Starring Ed Begley Jr., Antonio Sabato, Jr., Julie Warner and Kristy Swanson. Produced by Vuguru.
• A Supermodel Stole My Husband: A lighthearted makeover show in which a frustrated wife enlists an adored supermodel to help transform her husband. Produced by AOL Studios.
• Heidi Klum on AOL: A guide to fabulous living for everyday women, including fashion, beauty, parenting, lifestyle, fitness and nutrition. Produced by Full Picture.
• Jocks & Jills: Sports show meets The View in a fresh and funny sports talk show hosted by a rotating panel of diverse celebrity guests. Produced by Flavor Unit Productions.
• Lost in Translation: Reality series following a hip-hop DJ and famous ‘Nuyorican,’ as she attempts to learn Spanish, learn to cook, date and reclaim her Puerto Rican heritage. Produced by Flavor Unit Productions.
• Fearless Living: Based on her best-selling book On Becoming Fearless, Arianna Huffington looks at the many aspects of living a fearless life – from motherhood and parenting to beauty and health to navigating the workplace to friendship, relationships and aging gracefully. Produced by AOL Studios.