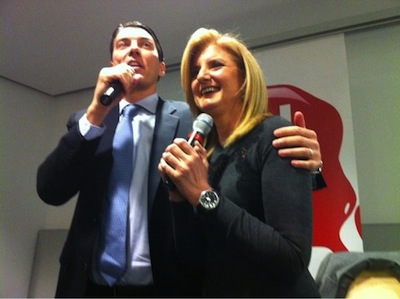 AOL eliminated approximately 900 jobs today, including 200 US employees in the media and tech group and 700 people in India.

In a company memo that has leaked out to a number of news organizations, chief executive Tim Armstrong tries to paint the move as a positive and necessary step towards turning the company around, saying it will “significantly improve AOL’s ability to focus on growth.” And despite the layoffs, Armstrong said AOL will be a “net importer of journalists.” (Translation: We’re hiring more than we’re firing.) The layoffs also seem a little less severe than the 400 to 500 US layoffs that were reported yesterday.

Still, there are reasons to be skeptical. It’s not just how many people got laid off but who. AOL’s own senior vice president of news Jonathan Dube posted on Twitter that the layoffs included “dozens of the most talented journalists & product folks I know.” Wired’s Sam Gustin, himself a former AOL employee, described it as a “bloodbath” and said the cuts included a number of veteran journalists, including PoliticsDaily’s Editor in Chief Melinda Henneberger.

Why would AOL target some of its most experienced writers and editors while it’s also hiring new people? Most likely because experience is expensive. It’s cheaper to bring on young writers who ask for less money, are willing to crank out lots of blog posts, and will go along with AOL’s aggressive new traffic strategy called “the AOL Way.” (When Engadget Editor Paul J. Miller left the AOL-owned gadget blog last month, he pointed to the AOL Way as evidence that the company “has its heart in the wrong place.”)

Former AOL employees aren’t the only ones with doubts about what Armstrong claims is an “enhanced focus on quality journalism.” New York Times Executive Editor Bill Keller published a column today called “All the Aggregation That’s Fit to Aggregate”. While it was almost certainly written before the layoffs were announced, it’s still relevant. Keller takes aim at The Huffington Post, which AOL recently acquired, and which will take a prominent role in the company’s editorial structure. Keller’s arguments are pretty familiar, but they’re stated eloquently and amusingly:

“Aggregation” can mean smart people sharing their reading lists, plugging one another into the bounty of the information universe. It kind of describes what I do as an editor. But too often it amounts to taking words written by other people, packaging them on your own Web site and harvesting revenue that might otherwise be directed to the originators of the material. …

Last month, when AOL bought The Huffington Post for $315 million, it was portrayed as a sign that AOL is moving into the business of creating stuff — what we used to call writing or reporting or journalism but we now call “content.” Buying an aggregator and calling it a content play is a little like a company’s announcing plans to improve its cash position by hiring a counterfeiter.