One year after acquiring the Texture all-you-can-read magazine service and integrating most of the company’s employees into the Apple News team, Apple today revealed a rebranded version as its own news subscription service: Apple News+.

After announcing that Apple News is now the number one news app, with over 5 billion articles read every day, Apple CEO Tim Cook said that Apple would debut the News+ service to provide access to multiple news publications every month — 300, according to Roger Rosner, the company’s VP of applications. The service includes both magazines and newspapers, including the Los Angeles Times, Wall Street Journal, National Geographic, and Wired, among many others. Select all-digital publications are also featured.

Individual publications can include “live covers” — traditionally flat covers brought to life with videos — and article formatting that’s specific to the iPhone, so a user doesn’t need to zoom in and out of PDFs. The News+ interface is directly integrated into Apple News. 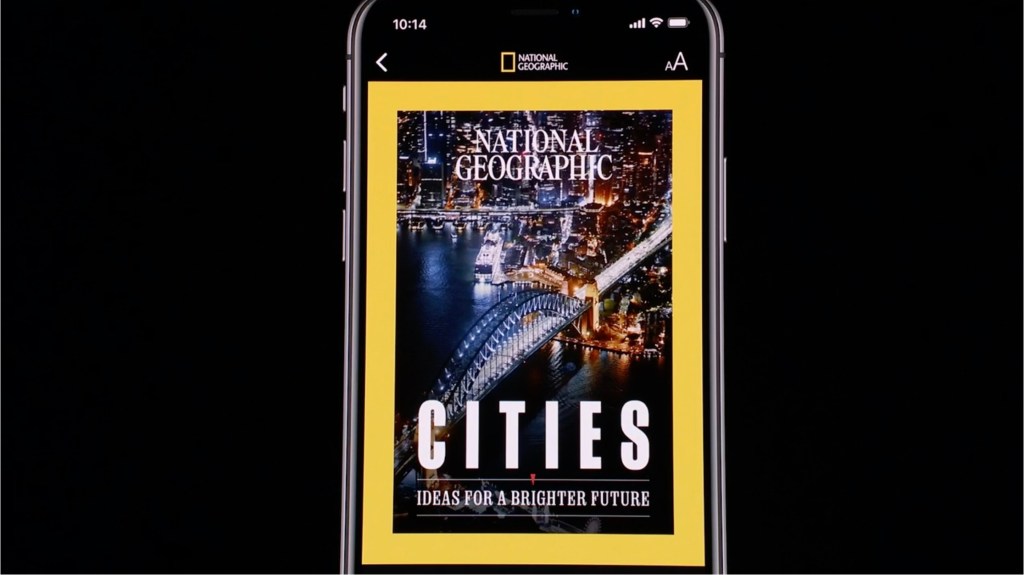 Apple says that the service uses on-device intelligence to make determinations on articles to recommend to users, and does not allow advertisers to track users — “what you read about on Apple News will not follow you across the web,” said Rosner.

Today’s announcement was one of several widely expected announcements heading into the company’s “It’s Show Time” media event, and a poorly kept secret. Following grumbling from holdout publishers in February regarding Apple’s revenue-sharing plans for the service, hooks for the feature popped up in a macOS beta earlier this month.

Prior to its acquisition by Apple, the six-year-old Texture offered unlimited access to over 200 magazines for a recurring $10 monthly subscription fee. Pricing is being kept the same for News+, with the first month free and Family Sharing included. U.S. and Canadian users will get the service today, with Australia and Europe later this year, starting with the U.K.

Controversially, Apple is reported to be taking 50 percent of the subscription fees for itself and distributing the remainder to publications fractionally, based on the attention their individual articles receive.

Thanks to its integration with iOS and macOS, Apple News has become a popular app with iPad, iPhone, and Mac users — and generated commensurately large audiences for individual news stories. But publishers have complained that Apple News has thus far generated limited revenues and little to no loyalty to their brands, despite Apple giving publications the ability to keep 100 percent of ad revenues from self-sold ads, and in some cases paying for early access to third-party news content.

Apple News and Apple News+ aren’t Apple’s first efforts to redefine journalism for the post-print era. In 2010, the company pitched the original iPad as a potential savior for the moribund newspaper and magazine industry, launching a publication aggregation folder called Newsstand in October 2011. Apple also acquired Prss, a digital magazine creation platform, back in 2014.