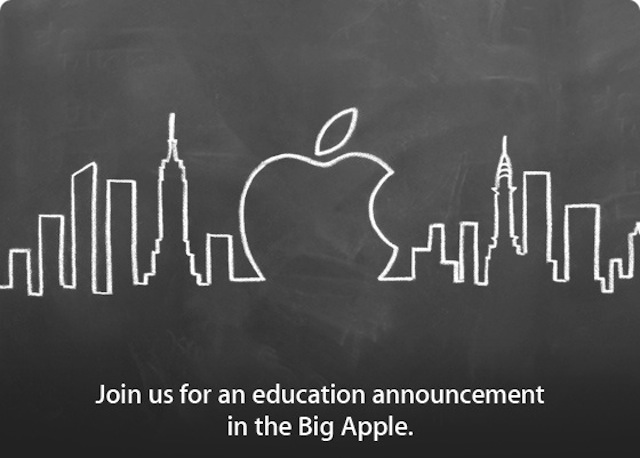 Apple is sending out media invitations to an event next week where it plans to make an “education announcement”, much to the dismay of many fanboys and fangirls hoping for information about the company’s next generation iPad.

The event, which is scheduled for January 19 at the Guggenheim Museum in New York, is expected to be a low-key affair. The invitation, as you’d expect, doesn’t contain any details that would shed light on what the announcement will be. It could be something as ambitious as putting iPads in the hands of more public school children, the next evolution of its iTunes U service or maybe even something that would disrupt the textbook industry. (It’s worth noting that the Guggenheim Museum is where Apple announced the News Corp.-owned iPad “newspaper” The Daily.)

Walter Isaacson, who authored the official biography of Apple co-founder and former CEO Steve Jobs, has commented that the company was working on a project involving school text books. Yet, Jobs declined to go into detail about the project since it was (is) Apple’s creation and not a personal project.

The education book publishing industry is mammoth, bringing in annual revenue upwards of $5.5 billion for sales of lower education (Kindergarten to 12th grade) and $3.7 billion for sales of scholarly/higher education in 2010, according to statistics from the Association of American Publishers. So it makes perfect sense that Apple would want to enter into an $8 billion industry. (It also helps that textbooks are very expensive, mostly because of unnecessary bureaucracy or a lack of regulation at the university level.)

What do you think Apple will announce? Let us know in the comments.