Following today’s big product debuts, Apple announced that every iTunes customer in all 119 markets across the world will receive a free copy of legendary band U2’s latest album.

“This makes it the largest album launch, ever,” Apple CEO Tim Cook said on stage at today’s iPhone 6 and Apple Watch event.

U2 holds a special place in Apple history, as the band was central to one of the company’s very popular ad campaign for the iPod/iTunes in the mid- 2000s. As Apple usually invites bands to perform at their events, and it’s only fitting that U2 made an appearance. However, the free album was a surprise I don’t think many were expecting. 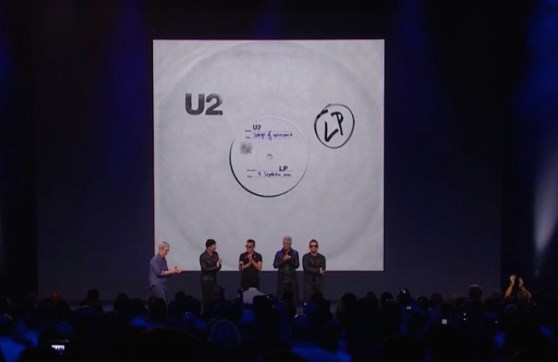 The new U2 album, Songs of Our Innocence, will be available starting now via your personal iTunes music library. And the album will also play on both Apple’s iTunes Radio and Beats Music streaming services.

I’d imagine Apple had to spend quite a bit to make this happen. But as a result, it has an exclusive new album from a very well-known band that you can only get through Apple’s various music channels. Also, the album will remain exclusive to Apple through October, Cook said.

Here’s the video that U2 sang on stage at the Apple event, courtesy of Dean Takahashi.