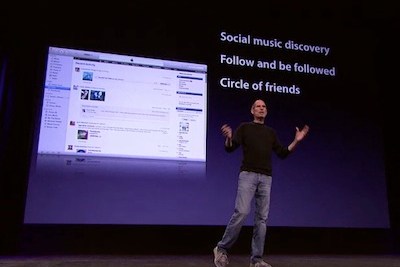 Apple today announced a number of upgrades to its music and media service, iTunes. Most notably, it’s giving iTunes a social layer. Chief executive Steve Jobs showed off a service called Ping, which he described as Facebook or Twitter for music.

Jobs described this as Apple’s attempt to solve the problem of “discovery” — how to find the content you want among everything in iTunes. Basically, users can follow other users or musicians, seeing what they’ve downloaded, music that they like, updates on other social networks, and concerts that they’re giving (if they’re a musician) or attending (if they’re a friend).

Like any good social network, your information can be as public or as private as you want, Jobs said. For example you could create a “circle of friends,” and just share purchases and recommendations within that group.

Presumably, this is built with some of the technology from Lala, the social music service that Apple acquired. However, it’s not the “cloud” music service that bloggers had predicted Apple would build with Lala, allowing users to stream music from online.

Ping is part of iTunes 10, the new version of the service, which is going live for 160 million iTunes users today. And Ping will be viewable on both your computer and on your iPhone and iPod Touch.

In discussing the new iTunes, Jobs shared some new statistics about the service. People have downloaded 11.7 billion songs from iTunes, 450 million TV episodes, 100 million books, and 35 million books, he said.

By the way, Apple’s new model for music discovery seems like it might make sense for iPad, iPhone, and iPod Touch applications too. The difficulty of sorting through Apple’s 250,000 apps is a constant complaint, so it might make sense to just add app purchases and recommendations to the network.