As Amazon and Netflix turn to the land of Bollywood in search of new users, they continue to face stiff competition from local giant Hotstar. The service, owned by media conglomerate Star India, offers a wide-range of sporting events in its catalog and boasted a 69.7 percent share of the local on-demand video streaming services market at the end of Q1 2018, according to market research firm Jana. 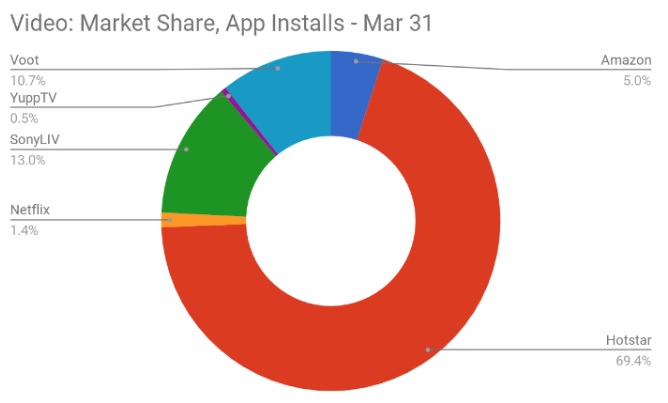 Speaking at Recode’s Code Conference in California this week, James Murdoch, CEO of 21st Century Fox (Star India’s parent company), said Hotstar has “145 million monthly uniques now interacting directly with the platform up to two billion minutes a day.” India’s streaming video market is expected to be valued at $218 million by 2020, according to a Deloitte report.

Jana said it used app installation data gleaned from its mCent browser to estimate each service’s market position. A spokesperson for the firm said the company had not looked at Apple’s App Store data. An earlier report by Counterpoint Research –  the only remarkable study to be done on this subject –  published in late December, shared similar figures.

And who’s winning when it comes to streaming music services? Google’s expansive foothold in India’s smartphone market seems to be benefiting its portfolio services. The company’s Play Music was installed on an estimated 63.7 percent of sampled smartphones, Jana reported, although it added that it did not know precisely how many of those users were paying customers. It said, however, that the joint entity of JioMusic and Saavn (the two announced a merger in late March) had 26.1 percent of the market. A part of Reliance Jio’s bouquet of content services, JioMusic is free to the telecom network’s 160 million plus subscribers. 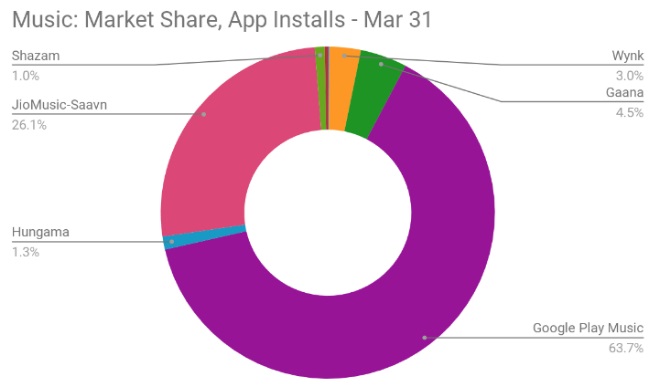 With 4.5 percent of the market, Gaana, which raised $115 million from Tencent and Times Internet earlier this year, is the third-most popular music streaming service in the nation, followed by Bharti Airtel’s Wynk, at 3 percent, and Hungama, at 1.3 percent.

Apple Music, which is available in India at a significantly lower price than in most countries, appears to be struggling to gain traction. It had 0.1 percent of the market in terms of time spent as of January 1. It’s worth noting, though, that iPhones themselves have settled for a tiny share in the overwhelmingly Android-dominated nation. And since iPhone users are the most likely demographic to subscribe to Apple Music, the service’s tiny market share isn’t surprising.

Data from marketing research firms AppAnnie and SensorTower largely corroborate Jana’s findings. On the Google Play Store, JioMusic and Google Play Music have enjoyed impressive rankings in recent months, while Apple Music continues to rank poorly even in specific categories such as music and audio.

Moving forward, Nathan Eagle, chief executive and founder of Jana, said he expects more consolidation in India’s streaming services industry. “It will take deep pockets to stave off the larger players who are all making large bets in the region,” he said.