Following a delay from the HomePod’s originally promised December 2017 release date, Apple today announced that its smart speaker will debut in the U.S., U.K., and Australian stores on February 9, with preorders starting this Friday, January 26. Customers in France and Germany will be able to purchase the HomePod this spring.

Apple describes the $349 HomePod as offering a “magical new music experience,” combining high-quality audio with Siri voice controls. The 7-inch tall speaker has one woofer, seven tweeters, and six microphones, and yet is monaural, which means it will — in the future, if one’s budget allows — need to be paired with another speaker for stereo sound. HomePod will initially be available in white or space gray, and combines a fabric mesh speaker chassis with a plastic body, a top-mounted Siri waveform display, and touch controls. Speakerphone functionality is promised for iPhones. 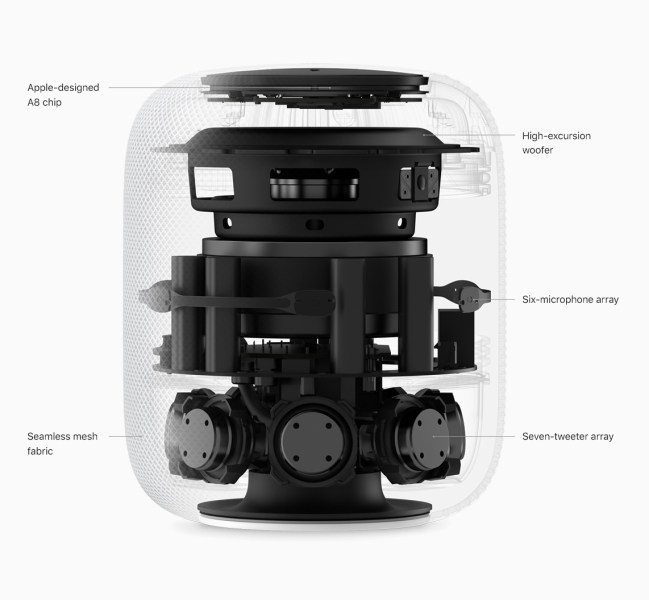 Apart from music features, HomePod’s Siri functionality is notably limited at first. Apple says that Siri will “deliver deep knowledge of artists, songs, albums, and more” when used with Apple Music. Philip Schiller, Apple’s marketing chief, notes that the “team has worked to give Siri a deeper knowledge of music so that you can ask to play virtually anything from your personal favorites to the latest chart-topping releases, simply by saying ‘Hey Siri’.”

HomePod was announced in June 2017 as a challenger to Amazon’s increasingly popular Echo speakers and was intended to be released in time for the holidays. The release delay was blamed on problems integrating the hardware and software. Even after the delay, however, Apple is notably shipping the HomePod without multi-room audio and stereo support, promising that the feature will arrive “this year in a free software update.” On a related note, AirPlay 2, Apple’s proprietary audio streaming protocol, is similarly now listed as coming “this year.”

While many smart speakers promise broad compatibility with various devices, HomePod’s list of supported products is somewhat surprising: It is said to require iOS 11.2.5 or later, which means that it will only work with recent iOS devices, described by Apple as the iPhone 5s or later, iPad Pro models, iPad Air or later, iPad mini 2 or later, or sixth-generation iPod touch. No mention is made of the Apple TV or Apple Watch. Bluetooth 5.0 and 802.11ac Wi-Fi are included, though it’s presently unclear whether non-Apple devices will be able to stream audio to HomePod.