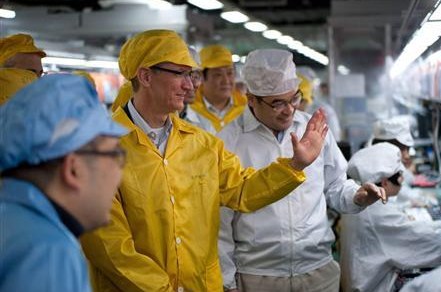 Apple CEO Tim Cook made his first trip on Thursday to a Chinese Foxconn production facility that is charged with making the company’s ultra popular iPhones.

Cook’s visit comes after weeks of accusations that employees of the Foxconn plant(s) were the victims of inhuman working conditions, low wages, and unreasonably long shifts. Those same claims, also perpetuated by This American Life’s interview with activist Mike Daisy, caused quite an uproar from Apple’s customers. It even sparked protests outside Apple retail stores and petitions calling for the company to end its relationship with many of its manufacturing partners.

While Daisy’s claims about Foxconn’s labor practices were later revealed to be mostly fabricated, Apple apparently got the message from its customers.

It’s likely that Cook’s visit is part of a new effort by the company to find out more about its manufacturing partners. According to a Reuters report, Cook was seen in pictures smiling and shaking hands with employees at the Foxconn Zhengzhou Technology Park facility, which employs 120,000 people.

China is a very important part of Apple’s business. The country is home to several factories that build its products, like the iPhone, iPods, iPads, and others. China is also Apple’s biggest market overall. Apple is currently selling the iPhone through Chinese wireless carriers China Telecom and China Unicom, but it has yet to strike a deal with the country’s largest carrier, China Mobile. (That could change when China Mobile upgrades to LTE.)

Cook’s trip also included meetings with Vice Premier Li Keqiang, the mayor Beijing, and a visit to Apple’s largest retail stores in the country, according to the Reuters report.