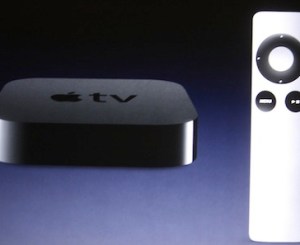 The hype around Apple’s $99 revamped Apple TV seems to have died down, but it looks like sales haven’t, as it’s set to cross one million units sold later this week, according to Apple.

But that’s not slowing down the success of rival set-top box maker Roku, which saw its sales double when the new Apple TV was launched in September, the company’s CEO Anthony Wood revealed in an interview with Business Insider. It expects to sell its millionth device by the end of year.

That both companies are seeing strong sales this season points to consumer demand for streaming video content in their living rooms.

We knew that Apple had a hit on its hands with the Apple TV’s vastly cheaper price point, and its support for Netflix streaming and 99-cent TV rentals. Apple says that over 400,000 TV episodes and over 150,000 movies are being rented and purchased each day by iTunes users around the world, but that doesn’t tell us anything about specific Apple TV numbers. The device isn’t perfect — Apple only has access to broadcast network shows from ABC and Fox (leaving out NBC and CBS), and many were disappointed that the Apple TV lacks apps, considering it’s based on the same iOS software as the iPhone and iPad.

It looks like Roku is able to mop up sales with consumers who are interested in an Apple TV-like experience, but don’t want to deal with the ATV’s limitations. Roku’s streaming set-top boxes start at $60, and the highest end model is available for the same $99 price as Apple’s box. The company’s devices also offer Netflix streaming support, but unlike the Apple TV, they have access to Amazon’s on-demand movie and TV library, Hulu Plus, and sports content from the likes of MLB.tv and UFC.

The company launched its second generation of devices, which bring HD support to the cheapest model, as well as a slew of new features, only a few weeks after the new Apple TV was announced.

Roku has been in the streaming video business since 2008, when its first-generation device launched together with lots of marketing muscle from Netflix. Wood says that its revenues will surpass $50 million in 2010, and it expects surpass $100 million in sales come next year.

Unless Apple improves the Apple TV’s content offerings and finally delivers on apps, it risks losing out on even more sales to the cheaper and more capable Roku box. Roku says that it’s going to focus on broader retail distribution, more licensed products (like the Netgear Roku box) and more content channels. I also expect that Google TV will see some major improvements next year, which could also compete against Apple.