The much-anticipated Apple Music launch came and went yesterday, and initial reactions to the new streaming service were largely positive.

The old Music app was given a boost via new music-suggestion features, which uses much of the technology Apple acquired through its $3 billion Beats Electronics acquisition in 2014, while also tapping existing iTunes data to create more tailored recommendations.

But sandwiched between the old world order of iTunes and the new “Spotify-killing” on-demand audio emporium in the cloud was the equally curious Beats 1, a radio station headed up by Zane Lowe, Ebro Darden, and Julie Adenuga, from studios in Los Angeles, New York, and London respectively.

It has been known for a while that Apple was working on a new human-powered radio service, but full details emerged of Apple Music at WWDC last month. It was touted as Apple’s “first ever live radio station dedicated entirely to music and music culture,” while promising to broadcast in more than 100 countries, 24 hours a day. 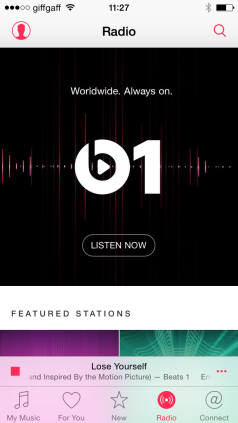 So wait — let’s get this straight. Apple basically hired some DJs and launched its own radio station directly in its “innovative” new music-streaming service? Yes, that’s about the size of it. It’s hardly inventing the wheel or, dare we say it, reinventing the music industry. But don’t let “simplicity” get in the way of what Apple’s doing here.

While most traditional radio stations do, of course, play music, they also broadcast news, weather, and traffic updates. Beats 1 has none of that, just tunes, interviews, and general music-related chat.

The concept of a “music only” station is far from innovative either, but Apple has the scale and mind-share to get into hundreds of millions of lives with minimal friction. Apple shifted a staggering 61.2 million iPhones globally in Q2 2015 alone. And Apple Music (with Beats 1) requires no app installs — just a simple operating system update.

Though the Apple Music streaming service requires a subscription, Beats 1 is completely free. You may have zero interest in paying $10 a month for Apple’s 30-million strong cross-genre catalog of tracks, but with two taps you can have some of the biggest influencers and taste-makers playing you a hand-picked mix of tunes spanning multiple genres and eras.

In short, Beats 1 is perfect for the casual music fan. It’s for all those who once spent half their salary on music, but now have too many kids and responsibilities to know whether Taylor Swift is a speedy clothes-alteration service or a pop star specializing in 4-minute pop ditties. And it’s also for all those people who simply like background music without having to install apps or do any searching. But it possibly won’t appeal to teenagers or those in their early 20s.

Also, given that Apple Music is baked right into the iPhone, Beats 1 is easy to access for drivers via CarPlay. Cars, after all, remain a popular “venue” for music-listening. 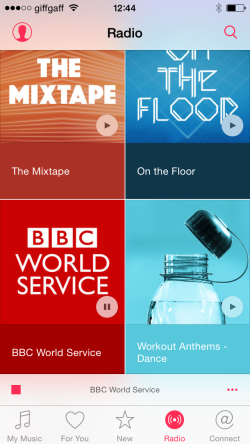 Beats 1 isn’t perfect though. The inherent problem of a global radio station is that it has a lot of different people and demographics to cater to — and with different time zones, one person’s Sunday morning is another person’s Saturday night.

During Zane Lowe’s inaugural broadcast yesterday, the DJ made it clear that the only thing tracks will have in common will be that they’re “awesome.” It won’t be genre-specific. This means that you could have some jazz-pop-trip-funk, country-infused garage-punk, or plain-old indie with your corn flakes.

Beats 1 requires an eclectic taste in tunes to appreciate it all. And that’s exactly why the broader Apple Music Radio has stations and playlists created by DJs — these include specific genres or themes such as “Workout Anthems.” And if you sign up to an Apple Music subscription, you can skip tracks as much as you like.

It’s far from innovative, but within the context of Apple Music and the Apple ecosystem, it makes perfect sense. It’s a minor masterstroke from Apple, one that offers a simple, frictionless channel for the Cupertino-based company to get the attention of millions of people with the promise of the best new music picked by experts.

In short, Beats 1 is Apple’s carrot-on-a-stick — it draws listeners in with a solid (free) service and it hopes you’ll see enough value to subscribe to Apple Music.