It’s pretty impressive to win a streaming media popularity contest when you aren’t actually streaming. But Apple has accomplished that impressive feat with iTunes, beating out movie and TV streaming media competitors like Netflix for top customer satisfaction honors in a recent study.

Customers gave iTunes a score of 80 (out of 100) in the ForeSee mobile satisfaction index, just edging out HBO Go and Netflix at 79, and beating Amazon’s 78 by a just-slightly-larger margin.

That’s significant, because Amazon typically ranks near the top in customer satisfaction studies. And Netflix, of course, is the streaming media company to beat.

To accomplish this, Apple simply cheated — the best kind of cheating, of course: the kind that benefits users.

Customers who cut the cable cord and rely on streaming media for their mainstream entertainment on smartphones, tablets, and TVs are primarily interested in performance. In fact, that’s the top priority: that the TV show or movie they’re watching streams without interruptions and/or glitches.

That makes sense because there’s nothing worse than coming to the climactic scene in the movie, only to be hit with the red Netflix loading screen. Apple cheats a little bit to avoid that scenario.

When you use iTunes to watch a show, you’re actually downloading that content, not streaming it. While that produces a delay before your video starts to play, downloading gives iTunes a significant advantage.

“Downloading greatly reduces the chances that the experience will be marred or interrupted by the speed of the user’s network,” ForeSee says. “While network speed will impact download time, once content is downloaded it should play seamlessly on the device. However, other companies in the category rely to some degree on a good connection for quality streaming.”

Most cord-cutters use their home Wi-Fi connections, with varying quality, and therefore varying customer satisfaction scores. Interestingly but not surprisingly, those who use public Wi-Fi to try to catch some media on the go report the least satisfaction.

But regardless of whose fault the poor connection is, consumers tend to blame the hapless media provider — such as Netflix or Amazon — for any perceived quality issues. And doing so has a major impact on future use, recommendations to friends, and brand preferences.

Interestingly, streaming quality is even more important than having the latest and greatest content. 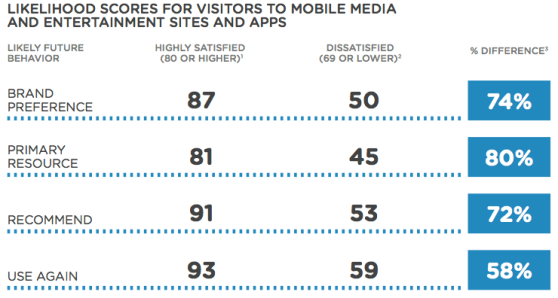 All of this means, I suppose, that Apple made a good choice in deciding to do download and play versus streaming, at least for now.

And that’s easier to do when you own the platform on which your media app lives.