Apple’s media empire is a massive and growing cash cow, sucking in $20 billion a year on apps, games, music, videos, software, and books. 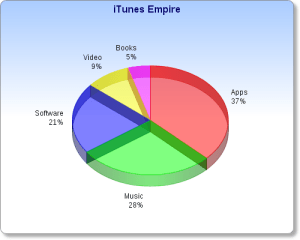 Apple analyst Horace Dediu crunched the numbers, and that $20 billion breaks down for each one of those 575 million users in interesting ways:

Each user, therefore, is spending about $43/year with Apple.

Growth is largely in video and apps, Dediu says. Apple just recently released new numbers on iTunes TV show and movie sales — for the first time since 2008 — and movie sales in particular are sharply up.

The iTunes service has hit 1 billion TV show downloads and 380 million movies to date, and Apple customers are downloading them at an increasing rate of 800,000 TV shows and 350,000 movies each and every day. And Apple, of course, recently hit 50 billion app downloads.

“As a result, my new estimate for the rate of spending on iTunes video is about $1.75 billion/year,” Dediu writes.

The new numbers mean that Apple’s users are increasing their spending at the same time that Apple is increasing its number of users. Just a month ago, Dediu’s estimate was $40/year, with the iTunes and app stores running at a $16 billion run rate.

In other words, Apple is both hunting and farming.

The numbers illustrate why Apple and Amazon are turning into natural enemies: They both feed on the same population. In Amazon’s most recent quarterly release, 12 out of the company’s 15 press release highlights were focused on digital content and Amazon’s trojan horse for digital content, the Kindle Fire.

We don’t know exactly how much Amazon makes on digital content versus cloud services versus hard, shippable goods — mostly because the company is notoriously parsimonious with data — but we do know that it’s a major focus for Amazon.

But with annual total revenues of just $61 billion, it’s unlikely that Amazon has anywhere near Apple’s digital revenues.

One key problem for Apple in its relatively new media empire, however, is margin.

Almost all iTunes revenue is on a 70/30 revshare, meaning that game developers and music owners get 70 percent of the purchase price and Apple keeps 30 percent. That’s not a great margin, and there has been some talk that iTunes runs on a break-even model. This means that as Apple’s digital revenues increase as a percentage of its annual revenue — $156 billion in 2012 — its overall margins will go down.

The biggest question for Apple, however — and Amazon — is Google.

With Google’s massive Android installed base of 900 million users and growing and Google Play’s increasing app and media sales, Google might just be looking to eat both Apple’s and Amazon’s lunch.