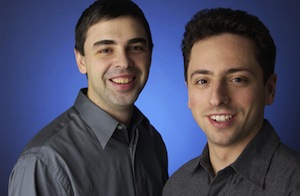 Google cofounders Sergey Brin and Larry Page may soon follow Facebook’s Mark Zuckerberg onto movie screens. Michael London’s Groundswell Productions and producer John Morris have acquired the rights to make a film from journalist Ken Auletta’s book Googled: The End of the World as We Know It, according to Deadline New York.

Zuckerberg, of course, is the subject of The Social Network, a David Fincher-directed film (based on Ben Mezrich’s book The Accidental Billionaires) due for release in October. Zuckerberg has said the film is largely fiction and that an accurate movie about Facebook’s early days would be “pretty boring.” But at least there’s some drama to the Facebook story, with jilted cofounders and lawsuits.

On the other hand, what I know about the early days of Google (gleaned mainly from John Battelle’s book The Search and from Auletta’s articles in The New Yorker) makes the story sound much less movie-worthy. To the extent that Google is interesting or controversial, it’s because of the technology, not the people. London told Deadline the movie will focus on the pair’s struggle to hang onto their idealism as the company grows.

I’m a bit skeptical that a mass audience will share the movie industry’s apparent interest in Silicon Valley stories. The Social Network has attracted plenty of attention in the tech world, but every time I see the trailer in theaters, the audience starts giggling. If Fincher’s movie doesn’t perform, I suspect that will hurt the chances of a Google film being produced as well.

Groundswell’s previous films include Milk and The Informant!, both based on true stories.