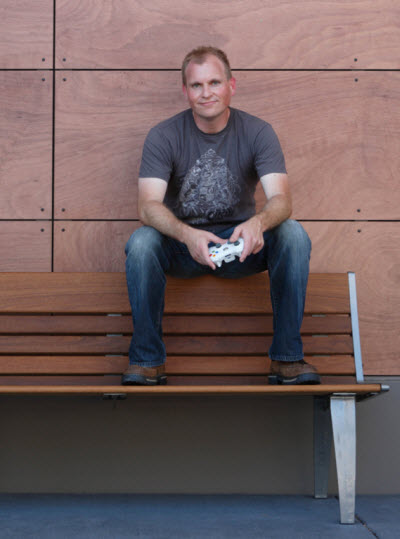 Last month, Comcast stirred up a debate about bandwidth caps, excessive internet use, and cloud computing after it cut off Seattle resident Andre Vrignaud (pictured right) for using too much internet bandwidth when he uploaded his music collection to the cloud.

Now Vrignaud, a frequent blogger on his Ozymandias site and a former game strategist at Microsoft and Intel, is asking tough questions about what happens when we all start using cloud services and upload data in large amounts.

He twice exceeded his monthly data cap of 250 gigabytes on his cable modem. Comcast banned him for a year, then invited him back after he made noise about it. Now he gets his internet service from Qwest/Century Link, a digital subscriber line (DSL) provider that delivers the internet via phone lines. But regardless of how his personal situation works out, it’s part of a larger debate that’s just beginning for  the masses.

The basic questions are: What do broadband providers have to put up with when it comes to their customers, particularly as cloud computing starts to put the strain on networks? And what right do consumers have to internet access?

Vrignaud is raising some more focused questions about the way that internet service providers deal with heavy internet users. Comcast came back with answers to his questions. So did Qwest/Century Link. We’ve printed Comcast’s answers below, followed by Vrignaud’s responses to the answers. And then we have the Qwest/CenturyLink response as well.

Why Vrignaud got cut off

Before we get into the answers, here are the facts about Vrignaud’s own case. It all started on July 11, when Vrignaud came home and discovered he had no internet. Vrignaud had a $60 a month Comcast cable modem that could deliver 15 megabits a second to his home and carry data out at 3 megabits per second. A month earlier, Vrignaud said he had a “polite but irritated” conversation with Comcast’s Customer Security Department about how much data he was using. He told them he had no idea how he used so much and wondered if his roommates may have hit the limit because they watched Netflix HD streaming movies and listened to Pandora’s internet-streamed music radio. He also had an open access point that he reserved for guests. Vrignaud wanted to know his usage details, but Comcast wouldn’t share that.

Comcast reactivated the service and Vrignaud deactivated the visitor access point and asked his roommates to keep an eye on their bandwidth. Then he forgot about it, got cut off again, and found that he had now been banned for a full year “due to exceeding Comcast’s acceptable use policy limits.”

Charlie Douglas, a spokesman for Comcast, said, “More than 99 percent of our customers don’t even come close to using 250 gigabytes of data in a month. Nationwide, our customers’ median data usage is four to six gigabytes a month. Two hundred fifty gigabytes is an extraordinary amount of data and equivalent to downloading 62,500 songs or uploading 25,000 hi-res photos.”

Douglas didn’t mention it, but a Netflix HD movie consumes about 1 gigabyte to 1.5 gigabytes of data per hour. You would have to watch 166 to 250 hours of HD movies a month to hit the bandwidth cap. That’s about 80 screenings of The Big Lebowski.

Comcast started its bandwidth cap in 2008. In late 2009, the company rolled out a bandwidth monitor for those 1 percent of customers who are likely to come close to the data cap. Douglas also said that Comcast transparently explains all of its data usage policies, which customers agree to when they sign up. It also describes what it considers to be excessive use.

When Comcast finally cut Vrignaud off for good, he made it known to the world via his blog and contacts. He also figured out that he hit his limit because he uploaded many hundreds of audio CDs and high-resolution pictures to cloud storage accounts. Comcast offered to provide service to him again after he made a lot of noise, but Vrignaud decided to go with rival Qwest/Century Link.

Looking at the larger issue

Vrignaud is trying to gather political and consumer support for his plight, not just from the David vs. Goliath angle, but on whether internet service providers should be allowed to cut people off for overuse. While he is a heavy user, he is also an example of a typical user in the future who will tap a lot of cloud services; at some point, we will all use a lot more bandwidth. He noted that Public Knowledge has asked Comcast why it needs to cut off users for “excessive use” when those users are not themselves directly to blame for network congestion. Uploading data from midnight to 6 am will likely not lead to congestion, but it could still trigger a violation of the data cap. Vrignaud suggested that Comcast charge heavy users an extra $10 or $20 a month to pay for their extra costs.

Related to this is the recent problem that Netflix had: It had to raise the fees it charges users for its disk-based movie service, though it kept the movie-streaming monthly fee unchanged. At some point, will Netflix have to raise that too as bandwidth providers start charging fees to Netflix? If there are fees attached to the new video services based on data usage, then consumers won’t want to use them as much and those new services won’t disrupt the traditional media the way they were intended to do so. That reduces consumer choice, and that is why Vrignaud asked the FCC to look into the matter of data caps.

Hitting Comcast’s cap is not likely for most users, even if they are watching lots of Netflix HD movies. But it’s more of a problem if they are using lots of other cloud services too, Vrignaud says. In any case, Comcast could probably better address the coming data problem by introducing tiered fees, such as charging extra or slowing data delivery if a user exceeds the 250 gigabyte cap.

Comcast has a business version of its data plan, ranging from $65 a month to $395 a month, depending on the speed of data coming into and out of the house. There is no cap for the business users, but the installation fees, hardware leases, and time requirements for that business option aren’t that attractive. Even if Vrignaud wanted to get this option, he can’t, since it is not available to anyone who had been banned from the Comcast consumer service for a year. At least that is what Comcast told him before the media blitz hit. Vrignaud notes that the business versions appears to be just a re-branding of the consumer service, as it uses “high-end networking equipment.” That phrase actually just means a DOCSIS 3.0 modem from Comcast — equipment that Vrignaud already has.