Automattic is seeing steady growth in the number of sites using its WordPress content management system — 27 percent of the internet uses it today — and there’s no shortage of die-hard fans and users who gather in towns and cities around the world to support one another’s efforts. The money gleaned from these conferences numbers in the millions, and now that money will be put to good use — supporting those who need it.

At the annual WordCamp US gathering, company chief executive Matt Mullenweg presented his “State of the Word” address, in which he announced that next year, Automattic’s WordCamp Central will be transformed into a public-benefit corporation (PBC). This will be an evolution of the existing WordPress Foundation.

Mullenweg also revealed that the company plans to expand its HackerOne-powered bug bounty program soon, and that there will be a “Growth Council” designed to accelerate adoption of open source technology around the world. 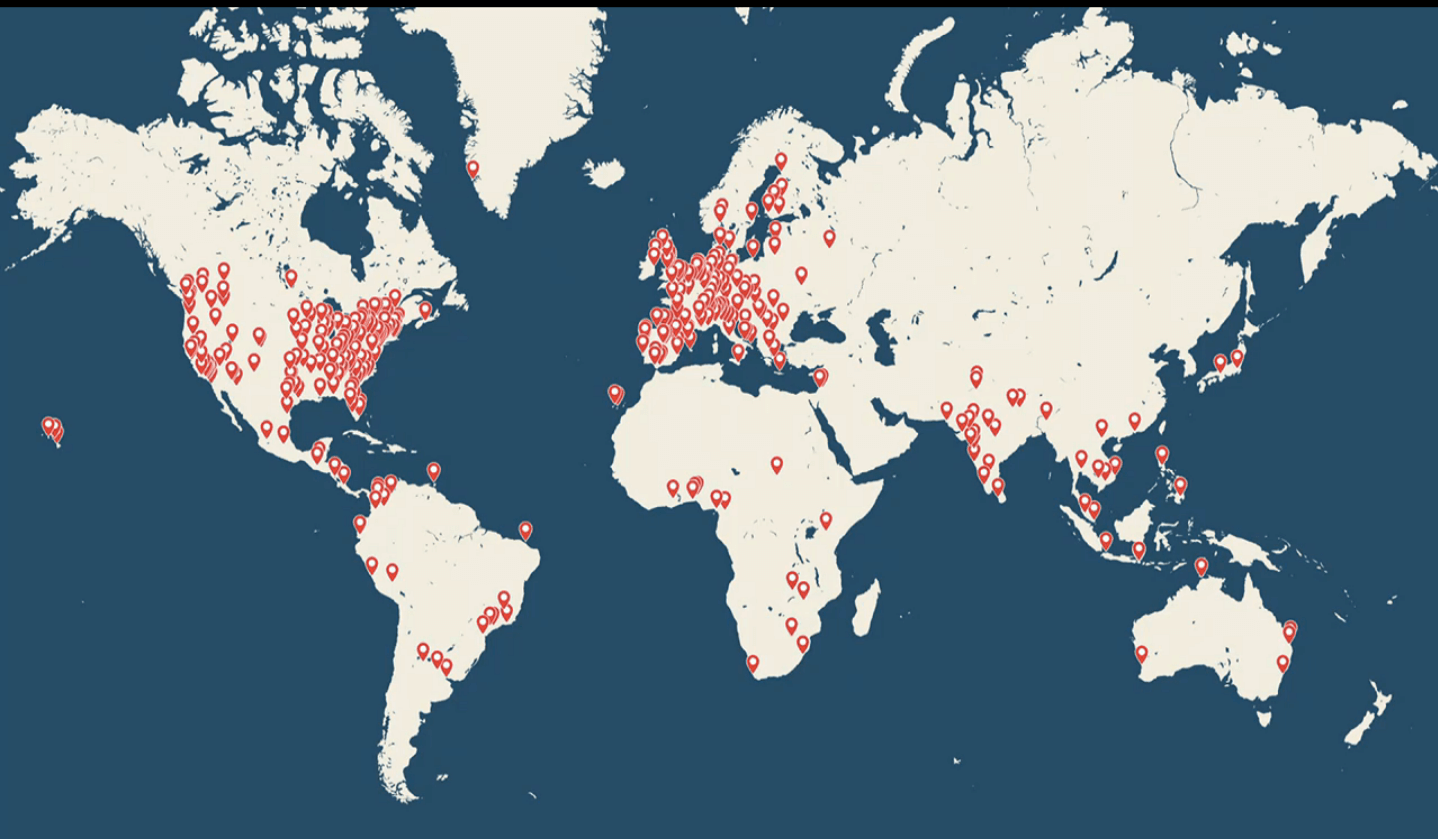 Above: Map highlighting the places where WordCamp events were held in 2016.

2016 saw 115 WordCamp conferences across 41 countries, an increase from 89 last year. More than 30,000 tickets were sold, highlighting the appeal these encounters have for WordPress aficionados, and generating a lot of revenue. Automattic estimates that about $4.3 million will be brought in this year, an increase from $2.8 million in 2015, with 99.9 percent coming from WordCamps alone, Mullenweg said.

However, because of some legal and tax restrictions with its WordPress Foundation, the organization is going to separate WordCamp from the foundation and transform it into WordPress Community Support, an independent entity designated as a PBC. It will be dedicated to supporting like-minded nonprofits, such as Hack the Hood, Black Girls Code, and the Internet Archive. What’s more, the plan is to also produce educational seminars and workshops in underdeveloped countries and to develop hackathons to create websites for nonprofits and non-governmental organizations (NGOs).

WordPress Community Support will be fully owned by the WordPress Foundation, a charitable group founded by Mullenweg that is dedicated to furthering the WordPress mission around open source projects. 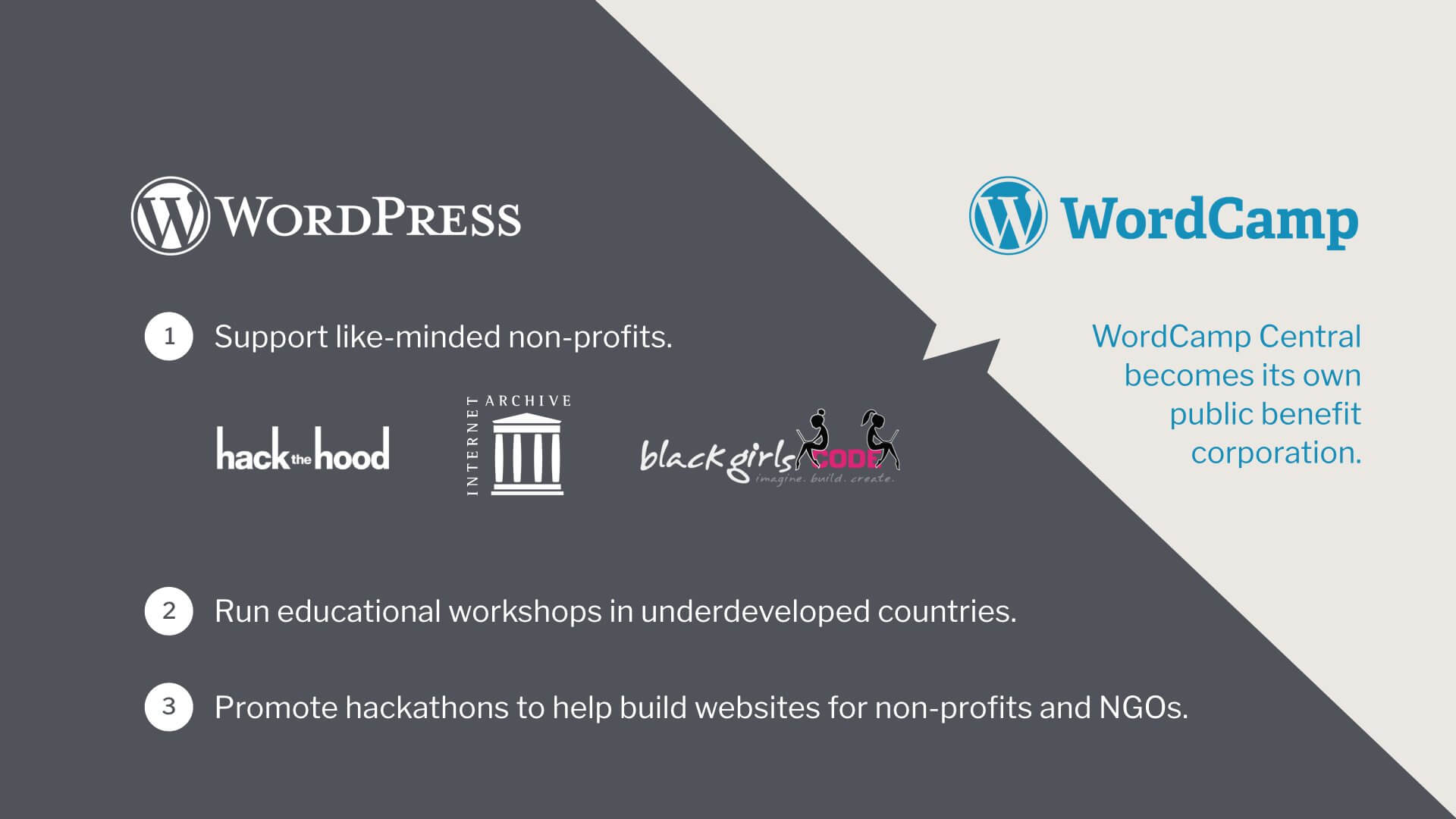 Above: Automattic is transforming WordCamp into a public benefit corporation (PBC) to support like-minded nonprofits.

Security is another major theme Automattic wants to tackle in the next year. This was made clear in Mullenweg’s post last year highlighting the company’s impending push toward SSL certification for hosting providers and features. In keeping with this theme, the company also shared that it will be doubling down on its association with HackerOne. Sixty-five hackers have already reported issues within the WordPress platform since Automattic began working with HackerOne in 2015, and there are plans to expand the program further in the coming months, perhaps to include plugins. Mullenweg said that while there is a dedicated WordPress.org bug bounty program, it’s not open to everyone due to a backlog.

It’s been more than a decade since WordPress was founded. Its growth has largely happened organically, but now it seems Automattic is maturing and is interested in advertising and marketing its services to a wider and more diverse set of people worldwide. “If someone you like recommends software, what better introduction to it?” Mullenweg said. “But I think we have a real opportunity to coordinate a bit…There’s no one company in the WordPress ecosystem to match $300 million in spend on telling people the WordPress story. And no one company needs to be large enough, because we’re a community. I feel we can become a lot more sophisticated…particularly with our messaging and presentation on WordPress.org to bring people in and tell [them] what makes WordPress different.” 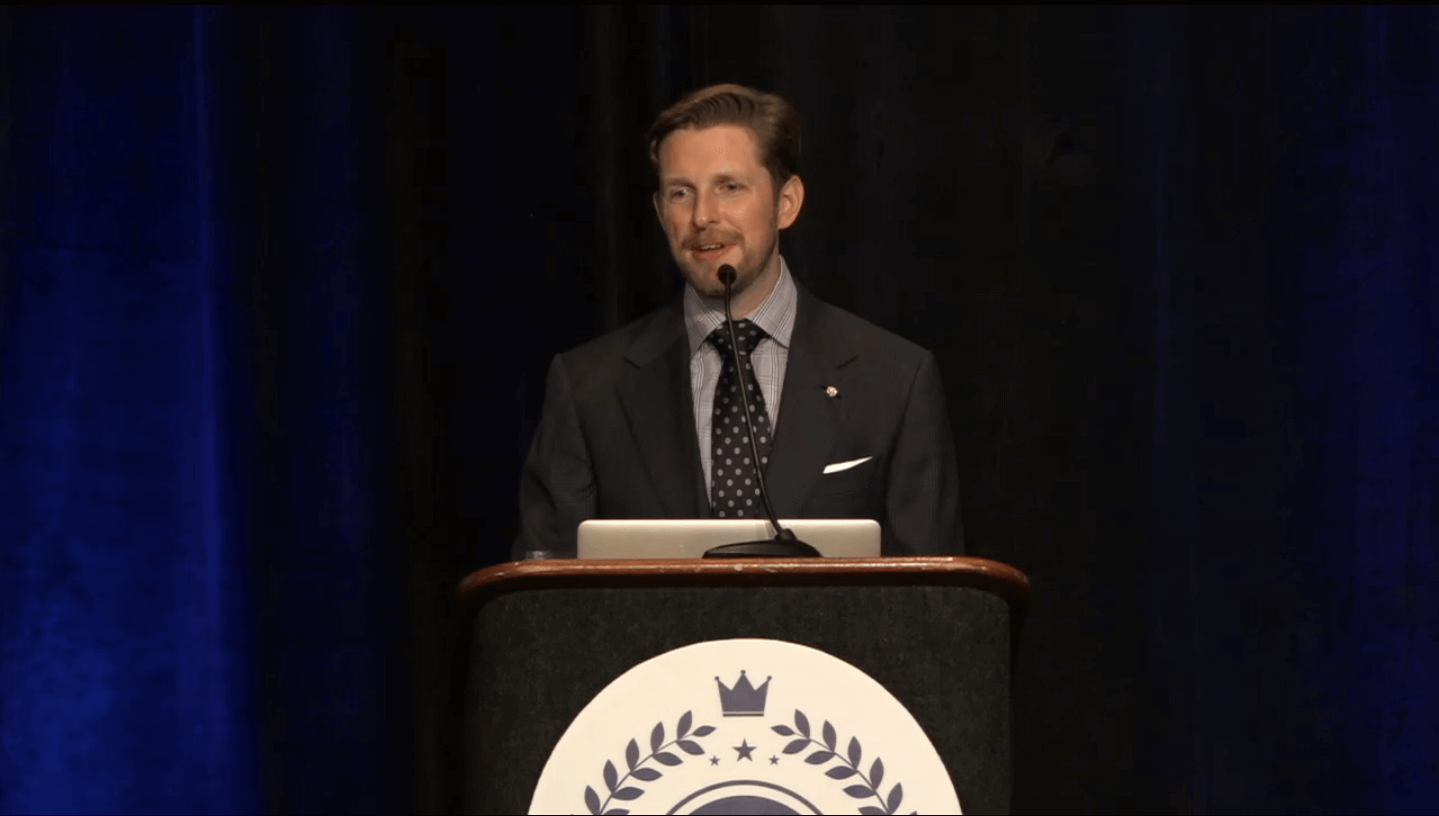 Above: Automattic CEO Matt Mullenweg delivers the 2016 “State of the Word” address at WordCamp US.

That doesn’t mean you’re going to start seeing Super Bowl commercials for WordPress, but the establishment of the WP Growth Council is aimed at countering the marketing offensive from “proprietary” software in certain markets and highlighting the benefits of open source. While not explicitly naming names, one might wonder whether Mullenweg is thinking about Wix, which Automattic has been in a bit of a tiff with recently after its CEO accused the website creation service of not adhering to the letter and spirit of the open source licensing. Wix denied all allegations, and its leader claimed he didn’t even know there was a fight going on.

Other announcements include the aforementioned SSL push (specifically HTTPS), which 11.45 percent of WordPress-powered sites are currently using today. “I believe this is more and more important in a post-Snowden era,” Mullenweg said. He made his case to those in attendance as to why there’s bigger emphasis around encryption, enhanced security, and more. This is certainly something people are concerned about in light of an increase in cyber attacks on major systems and services over the past year.

At the end of his address, Mullenweg provided a sneak peek at the latest release, which will be available next week.

We’ve reached out to Automattic for more details and will update if we hear back.

Updated as of 5:48 p.m. Pacific on Saturday: Updated the headline and parts of this story to clarify that the WordPress Foundation, not Automattic, will be forming a new public-benefit corporation.