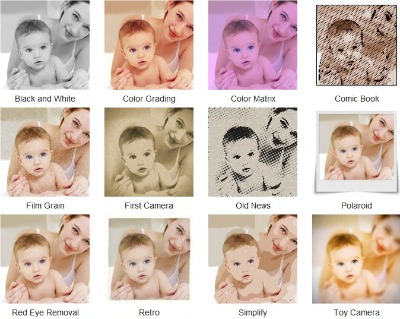 In one swift move, the online media editing suite Aviary may soon find itself at the heart of the photo app craze. The company today is announcing its Effects API, which will allow developers to easily integrate photo filters and editing utilities into their web and mobile photo apps.

Aviary has been pursuing online editing for some time with its own apps, but with the Effects API the company is making a bold move towards becoming a cloud-based service that developers and companies rely on to power their own photo solutions.

With the Effects API, developers can include stylistic filters, like those currently being popularized by hot mobile photo apps Instagram and Picplz, as well as simple utility features like cropping and red-eye removal. It also includes bulk processing capabilities, so users can queue up edits and have them all take effect at the same time. The API is Aviary’s second step towards easily making its services available to other developers within their own apps and sites — the first was the company’s embeddable simple photo editor, Feather.

Aviary also offers a Suite API that lets developers easily launch any Aviary app from their site. With three APIs in play now, Aviary has also launched a new developers site to make it clear what each API offers. And the company has revamped its home page to highlight the many APIs it offers, instead of just focusing on its own editing apps.

The Effects API will be free during its current beta period, but Aviary plans to offer tiered pricing plans eventually. At the moment it will only be available to web apps, but the company will roll out mobile app support soon.

Aviary’s head of business development Alex Taub said that the company decided to offer an API instead of trying to compete with popular photo apps head to head. So just like Twilio, whose SMS API powers the popular GroupMe app, Aviary hopes to be the driving force behind a slew of upcoming photo apps and services.