For now at least, BitTorrent Originals will only be produced by Rapid Eye Studios. The reverse is not true, though: Marco Weber, chief executive of Rapid Eye Studios, told VentureBeat he plans to push the content via cable and network deals, and eventually even release it on DVD.

BitTorrent first launched Bundle back in May 2013 with the hope of giving artists control over how they distribute their content. Since then, more than 10,000 publishers have joined the platform, and over 2 million legal titles have been served to over 170 million monthly users.

“Others in the original content space such as Amazon Prime, Netflix and Hulu have made great progress, but we are starting out with a big advantage: We have a larger audience than all of those platforms combined,” Matt Mason, BitTorrent’s chief content officer, said in a statement. The criteria for BitTorrent Originals is thus aimed at this audience: stories appealing to a young, creative, and influential group of 14-to-25-year-olds.

And yet, BitTorrent isn’t willing to push for complete exclusivity. Weber mentioned that Netflix’s House of Cards was the inspiration for BitTorrent Originals. Yet House of Cards is available on Netflix, and only Netflix.

“This landmark deal with Marco is a major milestone for us and an aggressive expansion into the media space for BitTorrent,” Eric Klinker, BitTorrent’s chief executive, said in a statement. “Expanding into the world of original content is a move that makes us a serious player in the media business, and takes us another step closer toward our goal: creating a sustainable digital future for creators of all kinds.”

BitTorrent and Rapid Eye Studios didn’t want to discuss the financials of the partnership, but the BitTorrent Originals description states there is a 90/10 profit split in favor of the content creator. The two were quick to emphasize this is “very much a collaboration,” not one company hiring the other.

The big news here is that BitTorrent is doubling down on creating content for its platform. In fact, Mason and part of his team will relocate from San Francisco to Los Angeles and work jointly from Rapid Eye Studio’s offices.

BitTorrent and Rapid Eye Studios are already in “advanced negotiations” with global advertisers for access to BitTorrent Original content. Sponsorship, advertising, and brand integration are all being considered.

“We have received an unprecedented and positive response from the largest global brands wanting to be a part of the BitTorrent Original initiative,” BitTorrent chief operating officer Ro Choy said in a statement. “Through BitTorrent Originals we enable brands to reach our massive, highly engaged, and coveted audience; not only through traditional standard ad placements but by integrating brands into the content itself.”

While Rapid Eye Studios is eager to produce all types of video content, advertisers have shown much more interest in serial content, and so the majority will be TV-style shows. “We will focus entirely on the creation of shows for the next two years,” Weber told VentureBeat. “Once we have this model up and running, we will move into independent film financing.”

Children of the Machine

The first BitTorrent Originals series will be Children of the Machine, which was first announced in November 2014 and begins shooting this spring. Weber (producer of Igby Goes Down, Unthinkable, The 13th Floor) and Jeff Stockwell (Bridge to Terabithea, The Dangerous Lives of Altar Boys) will serve as executive producers of the sci-fi series.

Weber told VentureBeat that the series was originally meant to be a pilot project with a paygate used to finance the show, but when advertisers started to show interest in the large audience potential, BitTorrent and Rapid Eye Studios decided to make it available for free. One episode turned into an entire first season with a viable business model, which then morphed into an exclusive relationship that is supposed to bring a “handful of original shows per year.”

“I found it fascinating to watch how BitTorrent has grown into an enormous creative community over the course of the last few years,” Weber said in a statement. “It became obvious to me that original content would add a tremendous amount of value and engagement to the growing BitTorrent Bundle platform. Once we started approaching major brands and advertisers with the series, the response was incredible. They were incredibly intrigued by the outlook of reaching an audience of 60-80 million fans per show in the most attractive demographic.” 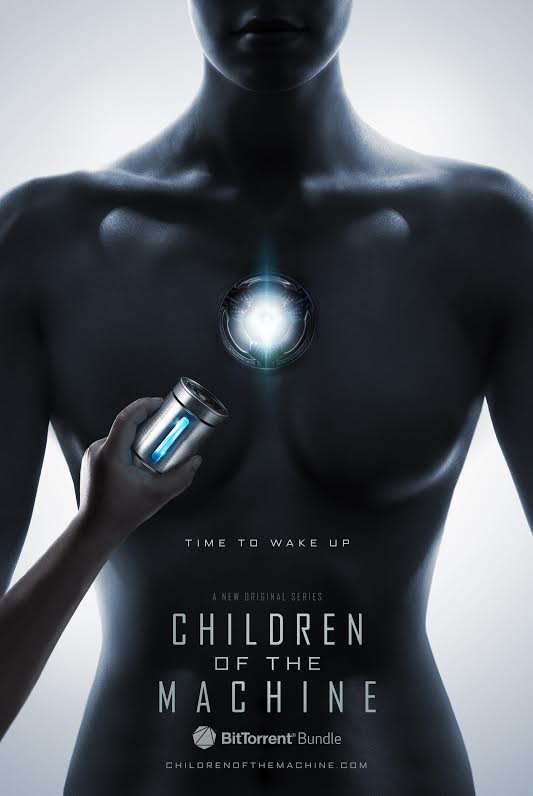 Children of the Machine will be launching on BitTorrent Bundle in the fourth quarter of 2015 for free. The first season of eight 60-minute episodes will be supported by advertising.

A premium version of the series will be available for $9.95 via BitTorrent Bundle’s paygate feature. Interested fans will be paying to remove ads, and they will get additional material such as the soundtrack, shots from behind the scenes, and other unseen footage (much like the “special features” on many DVDs).

BitTorrent projects that the Children of the Machine series will reach 60 million to 80 million viewers worldwide. Mason says this estimate is based on how BitTorrent plans to promote the Bundle, including via the front page of its website, other pages it controls, as well as the start page of the main BitTorrent client for Windows, OS X, Linux, and Android client.

Furthermore, a separate BitTorrent Bundle will offer a Children of the Machine video game for Android and iOS. Weber told VentureBeat the mobile game will arrive at “pretty much the same time” as the show, possibly delayed by a week or two. When asked, he said the video game developer was well-known but wouldn’t reveal its name.

The first step of a much bigger partnership

BitTorrent wants to figure out what original content actually works on its platform. Rapid Eye Studios wants to be the first to push new series to a potentially massive online audience. When asked about how long the exclusive partnership might last, they both repeated that, if anything, the partnership will only get deeper.

When I talked to BitTorrent and Rapid Eye Studios, it became very clear that they were very excited about BitTorrent Originals. And they should be — it’s a brilliant idea with a lot of promise.

Mason told VentureBeat that the main challenge will be engaging as many of BitTorrent’s 170 million users as possible. Other than that, he sees “no major obstacles,” and believes the Rapid Eye Studios deal feels like a natural progression that happened “very organically.”

That said, while Children of the Machine is supposed to be just the first of many series launched, it will make or break this partnership. If the show doesn’t catch on, we doubt more content will be produced. If it does, however, 2016 will bring a slew of BitTorrent Originals.