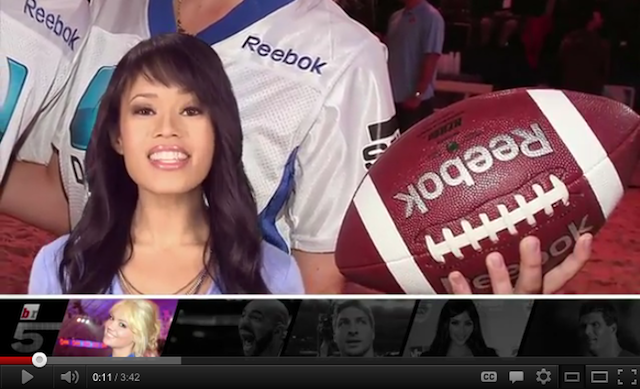 The Bleacher Report’s website’s content comes from over a 1,000 columnists and 6,000 contributors that write commentary from a fan perspective. While the new shows will definitely use this fan mentality, it’ll also feature high-profile names in the sports and entertainment world.

The new Bleacher Report channel is part of  YouTube’s strategy to boost the amount of premium original videos available on the site, making it more than just a place to watch funny cat videos and viral content. In October, YouTube committed $100 million in channel partnerships to make sure that this strategy succeeds. Some of these channel partnerships include Madonna’s DanceOn, World Wrestling Entertainment’s Fan Nation, and exclusive bits from the Onion News Network. More recently, YouTube forged deals to bring a variety of news-related channels to the site from partners like Reuters, Young Hollywood and Penske Media-Ion TV as well as a new indie film fest channel in partnership with Ridley Scott.

As for the shows themselves, here a brief description of each by Bleach Report’s news release:

Bleacher Report’s daily dose of the five biggest, best or most buzzworthy sports stories of the day, featuring Desi Sanchez (E! News Now and MTV) as the host.  Available Monday through Friday, the daily show covers the hottest games, athletes, personalities and stories across the sports landscape that is delivered through an irreverent and entertaining style that is unique to Bleacher Report.

Hosted by Alex Panos (HGTV’s “Run My Money” and SNY’s “Beer Money”), NFL Draft 365 will be the first show of its kind to provide year round coverage of the lightning rod for discussion and debate that is the NFL Draft.  With speculation, storylines and insatiable appetites for information, NFL Draft 365 will fill that void all year-long. Each weekly episode will include a current or former NFL player as a guest analyst, starting with Pittsburgh Steeler QB and two-time Super Bowl champion Charlie Batch. Regular features will include a War Room segment with Bleacher Report NFL Draft Lead Writer Matt Miller, in-depth profiles on top draft prospects, and candid memories from current and former NFL stars on their draft experience.

Produced by Jim Forman (Showtime Championship Boxing and ESPN Classic), Sarah Kreiger (The Olympic Games), Amir Ebrahimi (NACHO LIBRE) and Chris Peterson (Top Gear USA), Why We Watch features short form sports documentaries that tell unique stories that capture the emotion and passion inherent in why we watch sports.  Each weekly episode of Why We Watch will focus on a narrative unique to the sports landscape, be it a small story with major significance or a fresh new angle on a well-known event. Initial subjects include female auto racing pioneer Janet Guthrie and Robin Ficker, the NBA’s most notorious heckler.

Beginning in March, Full Ride is a weekly show serving information, opinion and analysis about the college football recruiting scene.  Produced by Marc Kohn (Heisman Trophy presentation and NFL Draft), Full Ride will focus on the big programs and five-star recruits that make the college football world turn while uncovering diamonds in the rough that might push the next national championship contender over the top.