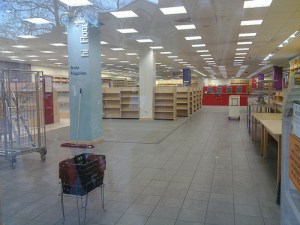 Borders, the second-largest chain of book stores, announced that it will close its 399 remaining retail locations after failing to sell to another company, reports the Wall Street Journal.

The closed chain could cause sales of traditional paperback and hardcover to decline even quicker than they have to date. While many consumers have turned from brick-and-mortar locations to digital storefronts like Amazon and Barnes & Noble, spurring the decline of independent booksellers as well as big retail chains, online sales haven’t fully made up for real-world sales, resulting in an overall decline over the past several years. At the same time, e-book sales have taken an increasingly large share of the book market, spurred by e-book readers like Amazon.com’s Kindle and the Barnes & Noble Nook.

The demise of this retail giant is the final chapter in David vs. Goliath story that started in the mid-1990s, with the founding of Amazon.com. Only now the David has grown up to become a Fortune 500 company, and Goliath is flat on his back.

Borders canceled a bankruptcy-court auction scheduled for Tuesday and instead, will ask the court to approve a sale to liquidators led by Hilco Merchant Resources and Gordon Brothers Group, according to the report. The liquidation could begin as soon as Friday. The company expect to close its doors for good by late September 2011.

The company filed for bankruptcy-court protection in February. Since then Borders has been hemorrhaging money and has failed to improve sales. Part of the reason it was unable to get back on its feet has to do with outstanding debts to publishing companies — most of which refused to ship Borders new products until it satisfied outstanding debts.

If you combine Borders’ stale selection of products with its lack of digital sales strategy, it’s easy to see why the company felt its best chance of being saved was though acquisition.

The company’s last chance at salvation ended after negotiations with private-equity investor Jahm Najafi to buy the retail chain collapsed. Borders was unsuccessful in its efforts to find a new buyer over the weekend, WSJ reports.