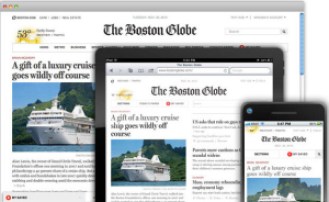 The Boston Globe today launched its new subscriber-only website, which puts much of the publication’s in-depth content behind a paywall.

The move to a subscription-based model, which was first announced in September 2010, is part of the company’s effort to become more profitable by charging its most loyal readers for an improved product.

The new BostonGlobe.com site has a clean, simplistic design that lacks the onslaught of ads common among other major newspaper websites. The site is also optimized (via HTML5) for mobile viewing on both smartphones and tablet computers. It also features a bookmarking service, similar to Instapaper, which lets readers save stories that they can read when they aren’t connected to the internet.

While the publication is offering a free trial subscription through September 30, the regular subscription fee is $3.99 per week for the digital-only version. Those who subscribe to the print version of the paper will have complete access for no additional charge.

Previously, The Globe’s content was published on the ad-supported Boston.com, which is also relaunching as a free local news site. The revamped site will continue to publish sports, weather and select news content from The Globe.

The Globe isn’t the only publication that has decided to put its content behind a paywall. Both the New York Times and the Wall Street Journal have decided to go with paid-subscription models.