Boxee is releasing a new Live TV stick add-on for its streaming media set-top box that will allow owners to gain access to live television channels, the company announced today.

The Live TV stick, which will be available in January 2012 for $49, is basically a high-powered HD antenna that provides Boxee Box owners with local channels like ABC, CBS, Fox, CW and NBC with no monthly fee. Of course, the HD signal has always been free for people in the U.S., but until now there’s never been a compelling reason for many to take advantage of it.

Boxee is betting that the combination of free basic live TV channels with videos from services such as YouTube, Netflix, Hulu, Vimeo and others will be enough for many people to end their expensive cable subscriptions (a.k.a. cut the cord). It’s likely to work, too.

One of the main reasons people hesitate killing their cable subscriptions, which can reach over $100 in fees each month, is the lack of availability of local programming, live sports and big events like the Oscars and presidential debates. And as the company points out, 89 of the top 100 shows were on broadcast networks last year.

In a new blog post, Boxee CEO Avner Ronen makes a compelling case for why cord cutting is soon to be on the rise. While listening to “Uprising” by the Muse, he writes:

“Cable companies keep telling the press and investors that cord cutting is not real, and that if it exists then it’s limited to people who can no longer afford cable. We are sure they are conducting objective and unbiased research, but we are meeting more and more ‘cord never getters’ and ‘cord cutters’ every day. They are more than just people tightening their belts in tough economic times, these are people who have left cable TV behind because it does not fit their lifestyle. They are part of a changing culture, with a changing expectation of how they watch the shows they love. The cord cutters we talk to have changed the way they watch TV. They don’t sit in front of it and channel surf hoping to land on something to watch, they don’t know when shows air, they sometimes don’t even know what channel shows are on. They love TV, but not necessarily on an actual TV. The only time they tune into a channel is to watch something live.”

The news that the Live TV stick will essentially be an HD antenna resolves earlier speculation that the add-on would be complementary to cable services like Comcast, Dish Network and DirecTV. GigaOM, which got its hands on a new Boxee software update that included support for live TV, was unable to connect, and now we know why.

One thing the new Live TV stick won’t do is turn the Boxee Box into a DVR. Yet, the company said it’s willing to add support for recording shows via the USB connection if enough people ask for it.

It also can’t compensate for areas in the country with poor HDTV signal strength. However, you can subscribe to a basic cable service (ranges from $13-$20) and connect the coaxial cable to the stick for the same experience.

The Live TV stick only works with the Boxee Box — meaning anyone who uses the Boxee Software on a computer or dedicated media box is out of luck. Right now the company is only supporting Live TV in U.S. and Canada, but additional countries could gain support in the future. 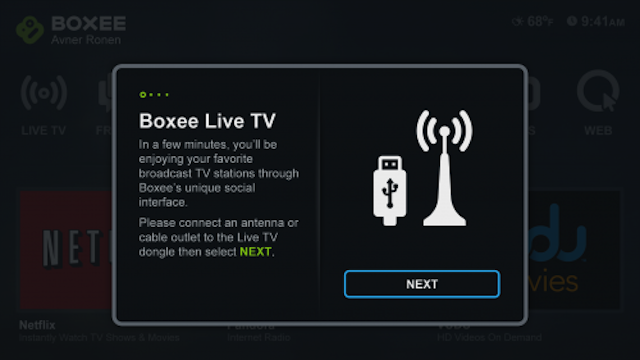