Britain is officially bringing age ratings to online music videos, in a move designed to inform parents of whether the content their kids are watching is suitable.

First announced by Prime Minister David Cameron last year, the pilot program constituted a partnership between the British Board of Film Classification (BBFC) and music-streaming sites Vevo and YouTube, while record companies Sony Music UK, Universal Music UK, and Warner Music UK were also on board for the initiative.

Now the program is here to stay, though it remains on a voluntary basis only — music labels aren’t compelled to participate. But it does bring a level of equality to the mix, given that music videos sold on physical-format media have been obliged to include age ratings since the introduction of the Video Recordings Act last October.

At the time of writing,132 music videos have been submitted to the BBFC for certification, and only one of these has attained an 18 rating – Dizzee Rascal’s “Couple of Stacks.” Elsewhere, 56 have been rated “12” and 53 as “15.” 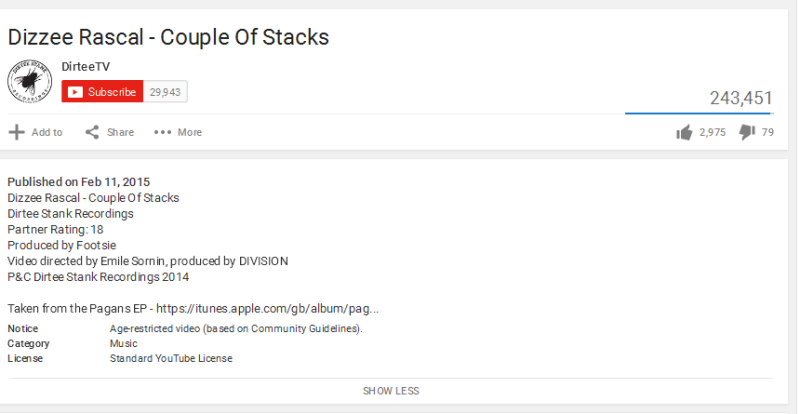 While no doubt well-meaning, the new age-rating setup is rather limited in scope — it only applies to music videos produced in the U.K. And for music made by the aforementioned record companies. Plus, there is very little extra here actually stopping kids from watching the videos in question — you would still need a fairly eagle-eyed parent to prevent such videos from being watched.

On YouTube, the rating is limited to the description below the video, while on Vevo it’s included as an overlay atop the video too.

Above: Vevo age rating of 12

For such a system to be truly effective, it would need to be applied across the board — all record companies, in all countries. Starting from today, the British government is working to bring independent music labels on board, too, and there’s a six-month pilot phase kicking off now.

Google already offers general content ratings and a restricted mode that helps parents filter out potentially objectionable content, so having a specific age rating lets parents automatically “age-gate” a video if it’s rated 18. Vevo is also currently working on ways to connect the age ratings to other technology on its platform that would support such controls.

While it’s still fairly early stage, it’s a sign of where things could be heading across the board. When one country does something successfully, it can often act as a blueprint for others to follow.