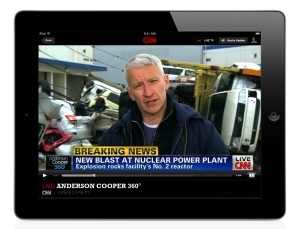 CNN on Monday announced it has upgraded its mobile iOS apps and website to support 24/7 live streaming video from its CNN and HLN networks.

The catch? Viewers only get access to live streams if they already pay for CNN through certain cable or satellite providers.

The list of providers, which covers about 50 million people, includes AT&T, Comcast, Cox Dish Network, Suddenlink, and Verizon. Weirdly enough, Time Warner Cable is not on the list of cable providers, even though CNN is part of the Time Warner family. Customers of Cablevision, another major cable provider, are also out of luck for the time being.

Time Warner has been a significant proponent of the “TV Everywhere” movement that lets customers watch TV through other devices, provided they’ve already paid for the programming. The well-received HBO Go service shows how this can be done well, as it provides a massive amount of content to users already paying for HBO through companies like Comcast, AT&T, Verizon, and DirecTV.

“A principal goal for CNN is to make more of our content available to more people on more platforms, and CNN’s participation in the TV Everywhere initiative is another step forward in that effort,” said Jim Walton, President of CNN Worldwide, in a statement. “We have long believed that our growth depends on keeping CNN essential and relevant to consumers wherever they are.”

Time will tell if Time Warner is able to push CNN 24/7 streaming for more of its already paying customers. But that will solely depend on Time Warner being able to make agreements with cable and satellite providers. This can prove especially challenging in an environment where companies want to charge more for consuming the same media content on additional devices.

Have you tried the CNN 24/7 streaming option? Will you use watch it more often now that you have more viewing options?