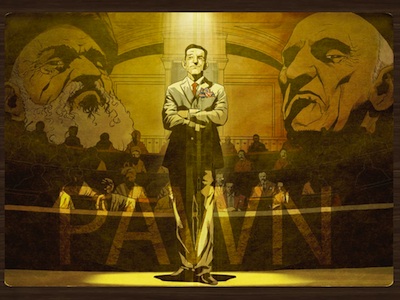 A few months ago, Cognito Comics and gaming company Tall Chair demonstrated one of the coolest media experiences that I’ve seen on the iPad — Operation Ajax, a graphic novel created specifically for the device. At the time, the idea was still very much in development, but today the Operation Ajax application has gone live in Apple’s App Store.

The major startups in digital comics, ComiXology and Graphic.ly, have focused their energies on making deals with publishers to transfer existing comics to the iPad or other devices. Operation Ajax, on the other hand, was created with the iPad in mind, avoiding some of the issues that come with transferring from print (the iPad screen is slightly smaller than a standard comic book page, for starters), and also making the supplementary material that can’t be delivered in print a natural extension of the experience.

In this case, the comic in question is based on Stephen Kinzer’s nonfiction book All the Shah’s Men: An American Coup and the Roots of Middle East Terror, which recounts the 1953 coup in Iran. Cognito gives the story dramatic shape by telling it through the eyes of a fictional CIA operative, but the company says it worked with Kinzer to make sure that the underlying facts are correct.

Operation Ajax is a comic, but it features lots of animation to move readers from panel to panel and page to page. Like I said, it’s an impressive experience, but it’s not a perfect one — it can be hard to figure out exactly when each animation is over and it’s time to turn the page. Readers can also tap on drawings to see extra material like character biographies and photos of real-life locations. They can refer to all that material later on through folders that they can access from anywhere in the story.

The Operation Ajax app is free (download it here) and includes the prologue for the story. After that, each chapter (which is about the length of a normal comic book) will cost $2.99, and Cognito plans to release a new chapter each month (or slightly more frequently).

Tall Chair, meanwhile, built the underlying platform and says that it could be used to create iPad-centric content beyond the political comics that Cognito is interested in — but we’ll have to wait for an announcement sometime early next year to hear the details.

Cognito and Tall Chair are both based in San Francisco.