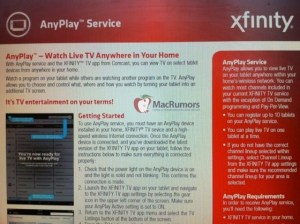 AnyPlay lets Comcast subscribers view live TV from an iPad, provided that the device is connected to a Motorola wifi router supplied by the company. The Motorola router apparently just shifts the video watching experience you’d typically have on a TV and reroutes it to your iPad. AnyPlay won’t work on other wifi connections or wireless networks.

According to the report, the AnyPlay service lets you register up to 10 different tablets, but you can’t watch live TV concurrently on two iPads at the same time — (a limitation that isn’t exactly implied by a service called Anyplay).

Comcast hasn’t made an official announcement about AnyPlay, which means we don’t know when it will begin rolling out to subscribers.

Mostly this feature seems like a dud and nothing to get excited about. I don’t quite understand why anyone would want to watch live television from a 10-inch screen with limited battery life when they are sitting comfortably at home with an available TV set at their command. Feel free to disagree with me in the comment section below.