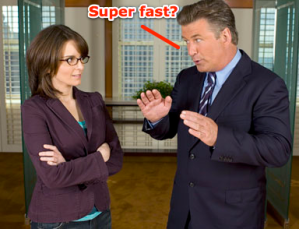 It took about one and a half minutes for Comcast CEO Brian Roberts to download an entire season of NBC sitcom 30 Rock during the live presentation given at cable industry trade event The Cable Show.

The official data transfer speed topped out at 1084 mbps, according the speedtest.net test conducted during the presentation, which Roberts pointed out was a real download, not a canned demo.

Acknowledging the growing number of services that consume lots of data, Comcast said it believes faster internet speeds are essential to the future of the cable industry.

Faster broadband speeds are certainly important for the company’s Xfinity TV content service to succeed. Comcast also took time to demonstrate the latest version of the service, which features a new polished user interface, support for applications and integration with social networks like Facebook and Twitter.

What wasn’t addressed during the demo was when consumers could expect to see a roll out of the new faster broadband. Also, there was no mention of the 250-400GB data cap, which presumably should be  adjusted higher to match the increased level of data being consumed with a faster internet connection.

Still, it’s good to see Comcast finally stepping up its game and improving its network to handle the current generation of services like Netflix, Hulu and others.