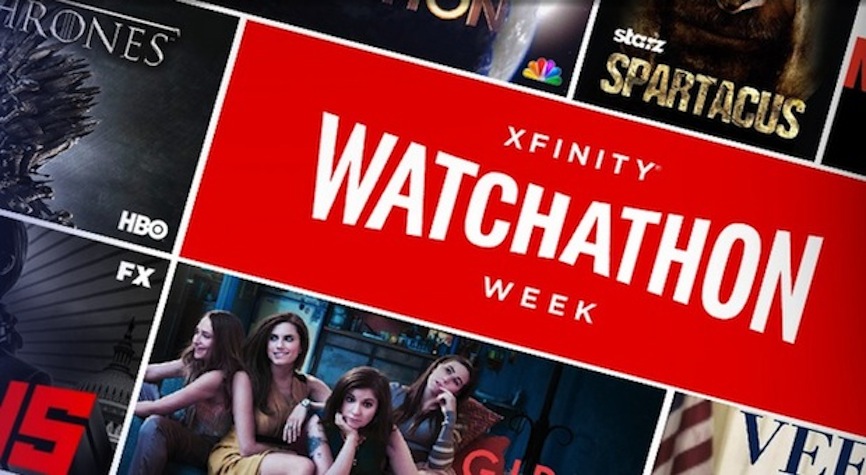 All week long, Comcast customers with an Xfinity TV account were granted access to full seasons of a slew of hit television shows — thus enabling viewers to embark on what’s known as binge watching (aka watching an entire season in a single sitting).

The promotion, called the Xfinity Watchathon Week, allows you to view these shows via cable boxes, mobile devices, or web browser, and includes shows such as Game of Thrones, Downton Abbey, Dexter, Girls, Spartacus, Mad Men, Revolution, The Walking Dead, Psych, and more. The move is significant because many of these shows are either about to end their current season or start a new season, and the alternatives to not catching up on these shows is either to miss them entirely or watch them illegally via torrents or unauthorized streaming video sites.

And while there’s still a couple days left before Watchathon ends, Comcast shared with VentureBeat some information on what’s getting binge-watched the most.

“We’re seeing double-digit percentage increases in views across platforms so far,” Comcast VP of video services Maggie Suniewick told VentureBeat. “Premiums [TV shows] are doing extremely well, and we expect that to continue as customers catch-up leading into the premiere of Game of Thrones on Sunday night.”

Everyone is most certainly frothing at the mouth waiting on Season 3 of Game of Thrones, but the most binged-watched show thus far is actually Showtime’s Shameless series, according to Comcast. I’ve never actually seen the show, which is about “an alcoholic man lives in a perpetual stupor while his six children with whom he lives cope as best they can” and stars William H. Macy. Yet, if I’d already seen every episode of Game of Thrones and Doctor Who three times over, I might decide to check it out while waiting for their respective premieres this weekend.

The data doesn’t include all viewing information from cable boxes, which is typically delayed by four days. (My guess is that this weekend will probably see lots of people using their cable boxes, too.) But regardless of what shows get watched the most, hopefully the data will send a clear message to big cable providers that people are more interested in binge-watching good shows than watching four different version of essentially the same cable channel.