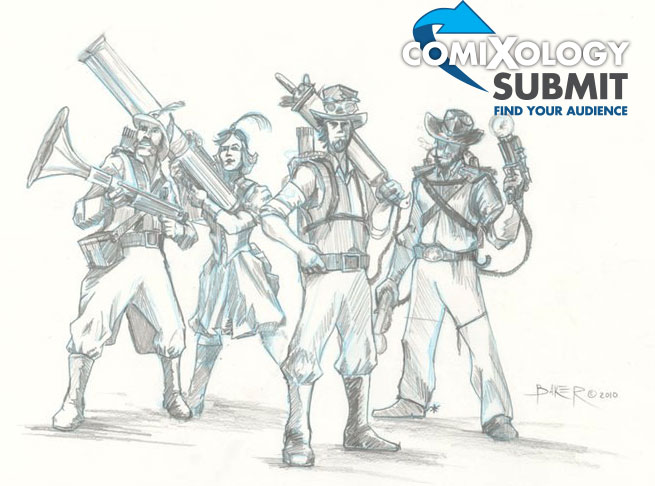 Ya know that beautifully drawn zombie comic you and your friends created that’s like, so much better than The Walking Dead, but failed to sell a single issue at the local comic book shop? How about your finished ‘steampunk Ghostbusters’ comic that never made its way to the printer? Well, ComiXology might be able to help.

Today, the digital comic book startup is launching ComiXology Submit, a submission portal for comic book creators who want to sell their self-published work in ComiXology’s digital store. If successful, the Submit portal could usher in a brand new age of renaissance for comics and graphic fiction.

ComiXology is the largest seller of single-issue digital comics across several devices (iOS, Android, and web browsers), and the only retailer that sells single-issue comics from the two largest publishers, Marvel and DC. Nearly every other notable comic publisher (IDW, Image, BOOM! Studios) also sells its books through ComiXology, which makes it the only real digital equivalent of a neighborhood comic shop. So, for self-published comics that otherwise aren’t getting any attention (let alone making money), the new Submit portal is a chance to get put on the same digital shelf as Spider-Man, Batman, and The Walking Dead.

“Every time we speak at one of the big comic conventions, the first question asked by fans is when we’ll start accepting submissions. It’s crazy,” said ComiXology CEO David Steinberger in an exclusive interview with VentureBeat. Steinberger and others within the company will be on hand to answer questions about the new submission portal at a New York Comic-Con panel later today.

And while there was plenty of interest from people wanting to submit content, it took the company a few years to figure out how to make money off of self-published submissions.

ComiXology Submit, which is launching initially as an invite-only beta, is pretty broad in terms of what creators can submit. A traditional comic has about 22-pages and retails between $3 to $4, but that doesn’t mean submissions need to adhere to those standards. Submissions can be color or black and white, and range from eight-page shorts all the way up to hundred-page graphic novels.

Steinberger said the number one thing the company is looking for is print-quality work that comic fans will buy.

In other words, submissions should be both entertaining and appealing to consumers’ wallets.

Steinberger said the company has a small team of reviewers in place, each of whom are well versed in independent comics. The company plans on notifying creators about the status of their submissions soon after they’ve been reviewed. Eventually the company would like to provide some form of feedback for submissions that didn’t get approved for sale in the store, and what they might do differently in the future. I’m guessing this is closer to Apple’s App Store approval process and less like editorial oversight.

Creators that do have approved submissions can set the price of their comics, beginning at 99-cents, but cannot offer their work for free at this time. Creators can also continue selling their comics via other digital retail stores.

In terms of money, ComiXology will take a 50 percent cut of revenue on each comic purchase, after platform fees. (For instance, Apple takes 30 percent of all sales made through the App Store, leaving 35 percent each for ComiXology and the book’s creator.) ComiXology isn’t charging creators a fee to optimize their work with its Guided View technology, which automatically zooms portions of a comic page when readers tap the screen.

The first batch of self-published books should hit the ComiXology store in about eight weeks, according to Steinberger. The ComiXology Submit portal is tentatively scheduled to open up to all creators in early 2013.

Why self-published comics are the next logical step

ComiXology generated over $19 million in revenue last year, which is an estimated 76 percent of all digital comic sales in 2011, according to comic book business news site ICv2. ComiXology is also consistently among the top grossing iOS apps, due in part to the release of new comics every Wednesday. Nearly 100 million digital comics and graphic novels have been download from the ComiXology platform since launching in 2009 — 45 million of which were downloaded in the last five months alone. The company also has very few direct competitors thanks to exclusive sales agreements with Marvel and DC, not to mention that a white label version of its digital comics platform is used by many of the major publishers.

Obviously, the company has cornered the digital comic book market and proven its viability as a business. But after publishers (Marvel, Image, DC, etc.) and app platforms (Apple, Amazon, Google) get their cut of consumer sales, it leaves little room for long-term revenue growth.

The company has, however, created a few ways to boost revenue. The first is by enticing the bigger publishers to produce comic series that appear only on as digital comics through ComiXology. DC Comics, for instance, created a handful of “digital first” series, while Marvel introduced its “Infinite Comics,” which leverage the Guided View technology for storytelling. ComiXology also managed to sign a deal with Monkey Brain Comics, a strictly digital publisher that launched exclusively this summer on ComiXology. But the other bit thing the company is doing to ensure continued growth is it’s self-published comic portal.

The more comics in ComiXology’s library, the better chance it has of increasing revenue. And since all the major print publishers (excluding Star Wars and Buffy comic book publisher Dark Horse) already have partnerships with ComiXology, the next logical step for increasing content is by selling those self-published comics.

Steinberger doubts that the ComiXology Submit portal will steal creators away from its larger publishing partners. Instead, he thinks it might have the opposite effect, unearthing new creators that eventually end up working for Marvel, DC, Image, and others.

“I’m a firm believer that publishers bring a lot to the table, and it takes a very specific kind of creator to write, draw, color, and edit every comic on a consistent basis,” Steinberger said. “And now those creators have a chance to sell their books through ComiXology.”